END_OF_DOCUMENT_TOKEN_TO_BE_REPLACED

Click on ‘Continue reading’ for:
 More links to interesting articles
 The Top 10 Faith and Work Quotes of the Week
 My Review of “The Soul of a Team” by Tony Dungy with Nathan Whitaker
 Snippets from Os Guinness’ book “The Call: Finding and Fulfilling God’s Purpose For Your Life”
END_OF_DOCUMENT_TOKEN_TO_BE_REPLACED

The Peanut Butter Falcon is a well-acted and heartwarming film, though it is somewhat marred by adult language. The film is co-directed and co-written by Tyler Nilson and Michael Schwartz.
Zac, played by Zack Gottsagen, is 22 years old and has Down Syndrome. He lives in a retirement home since his family abandoned him. He has never had any friends, and would like friends that he could call family. Zac repeatedly watches old wrestling videos from Salt Water Redneck, played by Oscar nominee Thomas Haden Church (Sideways), and wants to attend the wrestler’s school advertised in the video. As a result, Zac repeatedly tries to escape forcing Eleanor, a compassionate worker who works at the facility, played by Dakota Johnson (Fifty Shades of Gray), to label him as a flight risk. END_OF_DOCUMENT_TOKEN_TO_BE_REPLACED

Recently, my wife Tammy and I attended the 2019 Sing! Getty Worship Conference, held in Nashville. This is a conference without parallel, as pastor John MacArthur stated. The Sing! Conference is a part of Keith and Kristyn Getty’s five-year initiative; a learning journey to help pastors, musicians and leaders build a Biblical understanding and creative vision for congregational singing in their churches. This article has some of the take-aways from the conference that we found helpful and enlightening, and thought you would too.  Tammy and I also attended the 2018 Sing! Conference. You can read my reflections from that conference here. END_OF_DOCUMENT_TOKEN_TO_BE_REPLACED

In late September our annual extended family vacation took us to Maine. My wife Tammy and I have been taking these vacations with one or both of her sister’s families for nearly our entire married life. These days, some of the nieces and nephews who were not even around for that first vacation to Turkey Creek Ranch in Theodosia, Missouri, are now married and have children.   The little boy in the photo is now 38, and we’re returning again to T-Creek this year, meeting up with 6 children under the age of 4.
The temperatures were cool as we landed at our first of two locations/homes in Maine, this one being in the small town of Northport. Our house overlooked beautiful Penobscot Bay. By walking on a narrow path (we were warned to avoid the poison ivy and deer ticks off the path), we could get to a wonderful place to watch the bay, including the ferry, sailboats and loons.
As I sat there looking out over the bay in those first days of our vacation, I was reminded of God’s faithfulness that we often take for granted. Each day the sun comes up in the morning and goes down in the evening. In fact, later in our vacation, some of our group went to the top of Cadillac Mountain in Acadia National Park to be among the first in North America to see the sunrise. END_OF_DOCUMENT_TOKEN_TO_BE_REPLACED

Think back to when you were first in love. You were completely devoted to that person. As you sat across the table from them you looked into their eyes hanging on every word they said. You laughed at every joke they told, whether it was funny or not. You touched their hand, and enjoyed the smell of their perfume or cologne. You wanted to know everything about them and to be fully known by them. Then, your smartphone buzzed. You quickly checked it to make sure it’s not an emergency. Then you think, maybe I better check what other calls and texts I’ve missed. All of a sudden, you’re no longer fully present. You’ve been pulled away from the person that you love and who is right in front of you to address what may be causing the buzzing on your phone.
When I was in seminary along with working 50+ hours a week, I was really stretched for time. After work, my wife and I would meet for a quick dinner before I would begin studying, but she could often tell my mind wasn’t on her. Even though I was sitting right in front of her, more than once she would tell me that I might be listening to her, but she knew I was thinking about all I had to do that evening.   Definitely preoccupied.
Isn’t this how our relationship with God becomes at times? When he first drew us to him we couldn’t get enough of him or his word. We just wanted to be in his presence, to learn all that we could about him and be known by him. END_OF_DOCUMENT_TOKEN_TO_BE_REPLACED 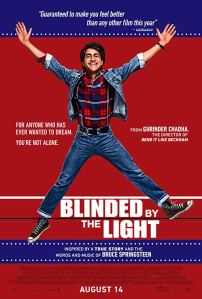 Blinded by the Light is an entertaining, emotional and heartwarming drama/comedy/musical, inspired by the life of British journalist Sarfraz Manzoor and his love of Bruce Springsteen’s music. It is based on Manzoor’s book Greetings from Bury Park: Race, Religion and Rock N’ Roll. Manzoor, who has seen Springsteen in concert more than 150 times, co-wrote the script with director Gurinder Chadha (Bend It Like Beckham), and Paul Mayeda Berges (Bend It Like Beckham). The film’s title is from a Springsteen song that was included on his 1973 debut Greetings from Asbury Park, N.J., which Manfred Mann’s Earth Band took to number one in the U.S. in 1977.
The film is set in the town of Luton, north of London in 1987. Manzoor’s character in the film is Javed, well-played by Viveik Kalra. Javed is a 16-year-old Muslim whose parents came from Pakistan. We see Javed and his family experiencing racism. Luton is facing a tough economy and job losses. Javed spends his day writing in his diary – poetry, and lyrics for his best friend’s band – and wants a career as a writer, and to get out of Luton and away from his strict and controlling father Malik, played by Kulvinder Ghir (Bend It Like Beckham). Javed’s father works at an auto plant, before losing his job, and wants Javed to focus on his studies and to be a lawyer or accountant. He tells him to stay away from girls because he will find Javed a wife when the time comes.
Things change for Javed when his classmate Roops, a Sikh from Pakistan, played by Aaron Phagura, gives him two Bruce Springsteen cassettes (Darkness on the Edge of Town and Born in the U.S.A.) and tells him to guard them with his life.  He tells him that he can thank him later. We can see the light come on for Javed at listening to his first Springsteen songs, “Dancing in the Dark” and “The Promised Land”, perhaps ourselves remembering the first time we heard a song from “The Boss”. The latter song comes up several times throughout the film.  Springsteen’s lyrics, which are creatively projected visually, give Javed the inspiration he needs to follow his dreams. Soon, Javed even begins to dress like Springsteen.
Kalra is excellent as Javed, and the film also features a solid supporting cast. Eliza, played by Nell Williams, is Javed’s likeable politically active love interest. Golden Globe nominee Hayley Atwell (The Pillars of the Earth, Captain America), plays Ms. Clay, Javed’s junior college creative writing teacher and mentor who encourages him to follow his dream as a writer. Screen Actor Guild nominee Deen Charles Chapman (Game of Thrones), plays Javed’s best friend Matt, a member of a punk rock band. Javed’s mother Noor, is a hard-working seamstress, played by Meera Ganatra.
The film does a good job capturing hairstyles and clothing from the late 1980’s. Seventeen Springsteen songs are included in the film, including the previously unreleased “I’ll Stand By You Always”, which plays over the ending credits. Some of the songs are played out in entertaining big dance numbers, Bollywood style.
Unfortunately, the film goes out of its way to connect racism with Margaret Thatcher, not unlike Spike Lee when he tried to connect David Duke with President Trump in BlacKkKlansman.
Themes in the film include following your dreams, hard work, a tense father/son relationship, politics, and racism. Content concerns include a small amount of adult language and racist violence.
Blinded by the Light is an entertaining film that has both serious and light-hearted moments, and is based on the story of a British journalist who was inspired to follow his dreams as a writer after hearing the lyrics of Bruce Springsteen. I enjoyed the film which had an excellent message at the end, but was marred by trying to connect the racism against the Pakistanis with British Prime Minister Margaret Thatcher.

Hannah Anderson discusses the issue of discernment in her book All is Good: Recovering the Lost Art of Discernment, which was named the best book in the “Christian Living” category of the 2018 Gospel Coalition Book Awards. She defines discernment as the ability to sort between a host of options and pick what is good. She tells us that discernment carries the idea of judging the merits of something, being able to distinguish between good and bad and what is best.
She states that in order to make good decisions, you must become a discerning person, a person skilled in wisdom and goodness itself. At the same time, she states that people who are confident in their own ability to make good decisions shouldn’t be. How are we to get this discernment?  Anderson tells us that God will give us discernment when we ask Him for it.
Discernment is a key attribute of leadership. I would go so far as to say that it is an essential for a good leader to have discernment. I had to make many difficult decisions as a leader. Here are three situations in which discernment was needed for me, and where I would often go to the Lord in prayer for wisdom: END_OF_DOCUMENT_TOKEN_TO_BE_REPLACED

Dee Ann Turner was Vice President, Talent and Human Resources for Chick-fil-A, Inc.  In her book “Bet on Talent: How to Create a Remarkable Culture That Wins The Hearts of Customers” she talks about the importance of truth-telling for a leader. She writes that “the kindest thing you can do for someone is tell the truth. This is especially true when providing feedback.” She tells us that truth-telling helps people perform better and often strengthens relationships; it’s likely that people would thank you for telling the truth, even when they don’t like it.
As a leader, this really resonated with me. I always enjoyed giving positive feedback, administering a good performance evaluation or promoting a team member. The flipside of this was not so enjoyable, but every bit as important. Some leaders will sugarcoat difficult messages, perhaps because they want to be liked or perhaps not to hurt the feelings of the person they were providing the feedback to, and I know that I did that over the years as well. But we do no favors to our team members, instead harming them, and not giving them the chance to improve, when we don’t tell them the truth. Here are a few specific situations in which it is important for leaders to tell their team members the truth: END_OF_DOCUMENT_TOKEN_TO_BE_REPLACED

There’s no organizational culture I appreciate more than that of Chick-fil-A. Their corporate purpose, and their “why”, is: “To glorify God by being a faithful steward of all that is entrusted to us and to have a positive influence on all who come into contact with Chick-fil-A.”

Here are 9 leadership lessons that we can learn from Chick-fil-A: END_OF_DOCUMENT_TOKEN_TO_BE_REPLACED