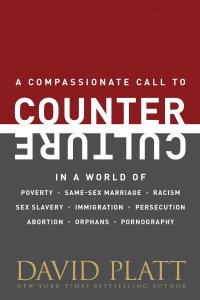 David Platt, author of Radical, has written an important new book. So important, I believe, that rather than doing one book review, I’m going to review the content chapter by chapter. Here’s our first installment, covering the material through chapter 1 of the book. Note, all of Platt’s royalties from this book will go toward promoting the glory of Christ in all nations.

Each chapter concludes by offering some initial suggestions for practical requests you can pray in light of these issues, potential ways you might engage culture with the gospel, and biblical truths we must proclaim regarding every one of these issues. These suggestions will also direct you to a website (CounterCultureBook.com) where you can explore more specific steps you might take.

Platt starts out by talking about the Gospel. If someone asked you to clearly describe the Gospel would you be able to do it? Platt writes: “The good news that the just and gracious Creator of the universe has looked upon hopelessly sinful men and women and has sent his Son, Jesus Christ, God in the flesh, to bear his wrath against sin on the cross and to show his power over sin in the resurrection, so that everyone who turns from their sin and themselves and trusts in Jesus as Savior and Lord will be reconciled to God forever.

In the Introduction, Platt writes:

Chapter 1: The Greatest Offense: The Gospel and Culture

Next week we’ll look at Chapter 2: Where Rich and Poor Collide: The Gospel and Poverty. I recommend that you purchase this book and read along with us.

Chapter 2: Where Rich and Poor Collide: The Gospel and Poverty

Next week, we’ll look at Chapter 3: Modern Holocaust: The Gospel and Abortion. I recommend that you purchase this important new book and read along with us.

Next week we’ll look at Chapter 4: The Lonely in Families: The Gospel and Orphans and Widows. Won’t you read along with us?

Chapter 4: The Lonely in Families: The Gospel and Orphans and Widows

Chapter 5 ~ A War on Women: The Gospel and Sex Slavery

•I never could have imagined that there are more slaves today than were seized from Africa in four centuries of the transatlantic slave trade.[38] I never could have comprehended that twenty-seven million people live in slavery today—more than at any other time in history.[39] I never could have fathomed that many of these millions are being bought, sold, and exploited for sex in what has become one of the fastest-growing industries on earth.
•I landed in Atlanta and drove to my home in Birmingham. On Interstate 20. I have grown up going up and down this interstate that spans all the way to west Texas, and I had no idea that it is the “sex trafficking superhighway” of the United States. This same road that represents freedom for ten million travelers every year reflects the reality of slavery for countless girls every night.
•Surveys consistently show that over half of men and increasing numbers of women in churches are actively viewing pornography. Remarkably (but when you think about it, not necessarily surprisingly), statistics are similar for the pastors who lead these churches.
•Research continually demonstrates a clear link between sex trafficking and the production of pornography.
•Every time a man or woman views pornography online, we are contributing to a cycle of sex slavery from the privacy of our own computers. We are fueling an industry that enslaves people for sex in order to satisfy selfish pleasure in our living rooms, our offices, and on our mobile phones.
•Any and every time we indulge in pornography, we deny the precious gospel truth that every man and woman possesses inherent dignity, not to be solicited and sold for sex, but to be valued and treasured as excellent in the eyes of God.
•In Scripture, God takes slavery, a clear product of sin in the world, and turns it into a powerful image of his salvation for the world.
•Quite literally, the Bible says, Jesus became a slave of humanity in order to save humanity.
•The climax of the Christian message is that the Master over the world has become a servant for the world.

Chapter 6: A Profound Mystery: The Gospel and Marriage

Chapter 7: Bought with a Price: The Gospel and Sexual Morality

CHAPTER 8: UNITY IN DIVERSITY: THE GOSPEL AND ETHNICITY

Chapter 9: Christ in the Public Square: The Gospel and Religious Liberty

Chapter 10: The Most Urgent Need: The Gospel and the Unreached