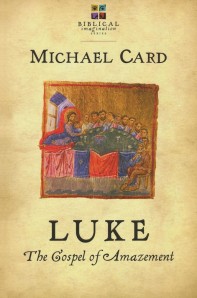 This was the first book in a series of four that Michael Card will write in the new Biblical Imagination Series. The next book in the series will be the Gospel of Mark.
Card writes that about thirty years ago, his mentor Dr. William Lane told him that he was going to teach him how he read Scripture. Card writes that he has spent the rest of his life in pursuit of that goal, reading the Scriptures with his imagination. In this book (and the following in this series), Card wants to show us how he reads Scripture, and how he’s come to understand about engaging with the Scriptures at the level of the informed imagination.

Card writes that the Biblical Imagination Series is an invitation to work through the Gospels with him. He states that he will take seriously the individual life of each Gospel writer as well as the life situations that called forth each of the books. The books will not be verse-by-verse commentaries as such, rather they will work with larger blocks of material, looking for major themes and trying to grasp the flow of the story of the life of Jesus.

Card begins with a few facts about Luke:
• He was a companion of Paul.
• He was not an eyewitness.
• He was a doctor.
• He might have been a slave.
• He was a Gentile.

Card writes that 40% of the book, what is known as the great central section, records Jesus’ final journey to Jerusalem. It is also known as the travel narrative, beginning in Luke 9:51 and ending with Luke 19:44. He indicates that Luke believed in prayer and that more than any other Gospel writer, he shows us the prayer life of Jesus. More than any other Gospel, Luke paints us a picture of Jesus on his knees.

Card states that of all the Gospel writers, Luke makes the most of Jesus’ parables. He goes on to write that two aspects of Jesus’ parables give them great persuasive power: identification and lack of closure.

Through the book, Card refers to the Hebrew word hesed. He states that he has had a lifelong love affair with words, especially untranslatable ones. Of all the biblical words he has encountered, no single word is more fascinating to him than hesed. It is the word God uses to define himself again and again in the Old Testament.

Card calls hesed, or undeserved mercy, the defining characteristic of Jesus.
Card regards the imagination as a bridge between the heart and mind, and Luke being the best beginning place for a series on the biblical imagination. He states that Luke itself is a bridge, a literary bridge between the Gospels and the letters. It’s also a generational bridge, spanning from the first generation of Christian believers, who were actual eyewitnesses, to the second generation, who had only heard about the things Jesus said and did. It is also a bridge between two worlds of Christian leadership: the world of having one perfect leader (Jesus) and the world of having many decidedly imperfect leaders. Finally, Card writes that it is a
bridge between the Old Testament world, in which having faith meant waiting like Simeon, and the world in which having faith means following, like the twelve disciples.

Card states that over seven hundred words appear in Luke’s writing that can be found nowhere else in the New Testament. Luke has collected eyewitness accounts. Card writes that one of the most interesting exercises as you read the Gospel is to try to determine who his source might have been.

Card calls the Gospel of Luke the Gospel of amazement. Throughout the book he will point out the many people who were described as being amazed. Among them were Zechariah’s neighbors, those who heard the shepherds, Joseph and Mary, those who heard the boy Jesus in the temple, and those who heard the adult Jesus in the synagogues at both Nazareth and Capernaum, Peter and his partners and those who witnessed the healing of the paralytic.
Card writes that it is only Luke, who is so tenderhearted toward the plight of women in general, who tells us specifically of a band of women who supported Jesus and his disciples from their own means.

Card writes of something he called “radical reversal”, what he calls the central theme of the Gospel of Luke. He states that it helps us to see why those who should don’t, while those who shouldn’t do. It is because God wants it that way. For example, when Jesus spoke in the synagogue in Nazareth, God showed favor to the widow from Sidon and to Naaman the Syrian and not necessarily the Israelites. This theme shows up in the teaching of Jesus in the parable of the banquet, the parable of the lost son, the parable of the rich man and Lazarus and the story of the Good Samaritan. Card states that if his working definition of the Hebrew word hesed is “when the person from whom I have a right to expect nothing gives me everything,” then the Samaritan clearly exhibits hesed.

Another of Card’s insights is that whenever someone is pictured as
repentant and receiving grace, Luke paints someone in the shadows
who simply hates the fact that God acts in such ways. Mercy is the
salvation of some and, inexplicably, the damnation of others. For example,
the other brother in the lost son parable is a hater of hesed.

I originally read this book after attending Card’s Biblical Imagination Conference
on the Gospel of Luke at a church in Ohio. It reinforced and enhanced the learning I got from the conference. I would commend this book to you as well as the corresponding album Luke: A World Turned Upside Down to you.

For more information on Michael Card, go to his website at
http://www.michaelcard.com