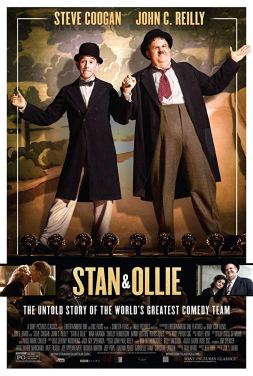 Stan and Ollie is a well-made, funny and at times emotional film about the final tour of the popular comedy team of Laurel and Hardy. The film is directed by Jon S. Baird and written by Oscar nominee Jeff Pope (Philomena), based on the book Laurel and Hardy: The British Tours by A.J. Marriot.
The film begins in 1937 on the set of the film Way Out West being filmed at the Hal Roach Studios. Laurel and Hardy are at the peak of their popularity, but Stan Laurel, played by two-time Oscar nominee Steve Coogan (Philomena) doesn’t feel that Roach, played by Golden Globe nominee Danny Huston (Magic City), is adequately compensating them, and he plans to push for more money for the duo. Oliver Hardy, played by Oscar nominee John C. Reilly (Chicago), doesn’t want him to push too hard, as he has debts – multiple marriages, gambling on the horses – so he is fine to keep his job with the salary just as it is. Oliver is under a different contract, and so when Stan leaves Roach, Oliver is forced to stay and partner with comedian Harry Langdon in the 1939 film Zenobia.
The movie then moves forward to 1953. The duo goes on a comeback tour of Scotland, London and Ireland to encourage a London-based film producer to finance a Robin Hood film. By this time, Hardy has gained more weight, and has heart and knee problems. Throughout the tour we see Laurel working hard on the Robin Hood film script. END_OF_DOCUMENT_TOKEN_TO_BE_REPLACED 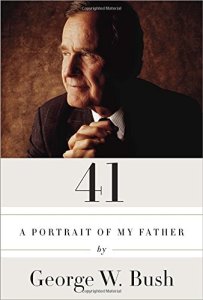 George Herbert Walker Bush, the 41st President of the United States was the only President in modern times not to write a memoir. His son, George W. Bush the 43rd President, has written this book that he says is not objective, but instead a love story from a son to his father. The book opens with an account of Bush the elder celebrating his 90th birthday with a parachute jump.
George H. W. Bush’s father was an accomplished golfer, United States Senator and investment banker. He started the family tradition of attending Yale. Bush’s mother, who died shortly after he lost his re-election bid to Bill Clinton, was a woman of strong faith.
Bush joined the Navy shortly after the Pearl Harbor attack, enlisting on his eighteenth birthday in 1942. He served for three years. During that time, he was shot down by the Japanese in the Pacific and rescued as the Japanese were trying to capture him. At age 78 he would return to the site and meet one of the Japanese soldiers that was there that day.

Click on ‘Continue reading’ for:
BOOK REVIEWS ~ More of this review and a review of Love Does for Kids by Bob and Lindsey Goff
BOOK NEWS ~ Links to Interesting Articles
BOOK CLUB ~ How the Nations Rage: Rethinking Faith and Politics in a Divided Age by Jonathan Leeman
I’M CURRENTLY READING….

END_OF_DOCUMENT_TOKEN_TO_BE_REPLACED

American Gospel: Christ Alone, available on Amazon and iTunes), looks at the biblical Gospel, and contrasts it with the so-called prosperity gospel, which is no gospel at all (Galatians 1:6,7). Unfortunately, America has exported the prosperity (health and wealth) gospel to other nations, which has caused significant problems for missionaries who go to those countries to teach the true Gospel. Through interviews, excellent graphics by Jason Jean and Les Lanphere (Calvinist) which include numerous bible passages, film clips of actual prosperity teachers/faith healers, the film, written and directed by Brandon Kimber, shows in a straight-forward manner that the Gospel is not Jesus plus anything else (works, tradition, healing, wealth). But using the actual words of the prosperity teachers and faith healers, the prosperity gospel is shown to be the evil that it is. Paul writes in 2 Corinthians 11:13 that such men (and women) are false apostles, deceitful workmen, disguising themselves as apostles of Christ. He gives a chilling warning in v. 15 that their end will correspond to their deeds. END_OF_DOCUMENT_TOKEN_TO_BE_REPLACED

END_OF_DOCUMENT_TOKEN_TO_BE_REPLACED 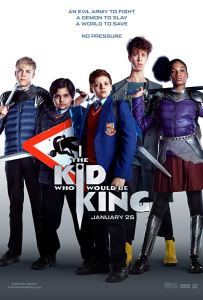 The Kid Who Would Be King is a heartwarming fantasy film that parents can enjoy with children, ages eight and above. There are some scenes that would be too frightening for younger children. This enjoyable film includes adventure, comedy and a good cast.  The film is written and directed by Joe Cornish (Ant-Man). He indicated that the film’s title is a playful reference to the title of the 1975 film The Man Who Would Be King.
The film begins with an overview of the story of King Arthur, who used the magical sword Excalibur to lead England during a time of war. He was a good king, but his half-sister Morgana turned to dark sorcery in hopes of stealing the sword and Arthur’s throne. Arthur defeated her, but she threatened to return one day.
END_OF_DOCUMENT_TOKEN_TO_BE_REPLACED

He made the moon to mark the seasons; the sun knows its time for setting.  Psalm 104:18

I’ve lived in Illinois my entire life thus far, and have no plans to change that. One advantage of living in the Midwest (according to my wife Tammy) is that we get to experience all four seasons – spring, summer, fall and winter. If I had my choice however, I would leave it at summer and call it a day. San Diego’s climate sounds good to me, but I remember a team member who absolutely loves the winters in Minnesota, which are even worse than Illinois.
Tammy tries to talk me through the winter. She’ll tell me that in December we have the holiday season, so it will go quickly.  We also have the shortest day of the year, so the days will begin to get longer.  END_OF_DOCUMENT_TOKEN_TO_BE_REPLACED

One of my favorite new books is Scott Sauls’ Irresistible Faith: Becoming the Kind of Christian The World Can’t Resist.  You can read my review of the book here.
Scott writes that Christians operating with a sense of joy, purpose, and mission in their work are integral components of irresistible faith. Here are 13 great quotes on work from the book:

This is Pastor Scott Sauls’ fourth book. I always find his books challenging and quite helpful. Irresistible Faith is no exception. The “Foreword” is written by Bob Goff who writes that the book is an invitation for us to return to the most authentic version of our faith. It’s also an invitation to join, or create, an authentic community of people trying to go somewhere beautiful with their faith. He states that Scott has given us some beautiful reminders about what each of us needs and about the Someone we can trust to go with. END_OF_DOCUMENT_TOKEN_TO_BE_REPLACED

Tim and Kathy Keller followed The Songs of Jesus, their excellent devotional book on the Psalms, with a second devotional book, God’s Wisdom for Navigating Life on the Proverbs. Here are 25 great quotes on work, vocation and leadership from the book:

END_OF_DOCUMENT_TOKEN_TO_BE_REPLACED

Glass is a psychological thriller and the finale of a trilogy from two-time Oscar nominee director M. Night Shyamalan (The Sixth Sense), who also wrote the screenplay for the film. The film brings together super hero characters introduced in his 2000 film Unbreakable and his 2016 film Split, the latter a surprise success after a few very disappointing films.
In Unbreakable, we met comic book expert Elijah Price/Mr. Glass played by Oscar nominee Samuel L. Jackson (Pulp Fiction). Elijah was born with a birth defect which left his bones very brittle and susceptible to breaks. As a result, as a child, he was mockingly called Mr. Glass by his peers. David Dunn, played by Golden Globe winner Bruce Willis (Moonlighting), is a security guard at a football stadium in Philadelphia with a troubled marriage and young son. He is the sole survivor of a terrible train crash. In fact, he didn’t even have a scratch on him. Elijah tells Dunn that he has been searching for him, someone who is special, indestructible. The film ends with Price, known as Mr. Glass, admitting to being behind several tragedies, including the train crash. He is put into an institution while Dunn begins to serve the public as a hooded vigilante.
In Split, we met mentally ill Kevin Wendell Crumb, played by Golden Globe nominee James McAvoy (Atonement), a man with 24 different personalities and sole survivor Casey, played by Anya Taylor-Joy, who was forced to discover her strengths while being held captive. The film ends with a surprise connection to Unbreakable, setting up the new film. END_OF_DOCUMENT_TOKEN_TO_BE_REPLACED