The Lion King is a remake of the popular 1994 animated film, which is also a successful stage musical. The film, being referred to as “live action”, is entertaining and the computer-generated imagery (GGI) is incredible. However, the film comes across as a bit flat, without emotion or as much of the humor of the original. In addition, there are scenes that are dark and violent that will be scary for young children.
The film was directed by Emmy nominee Jon Favreau (Dinner for Five, The Jungle Book, Iron Man, Chef). The screenplay was written by Jeff Nathanson (Catch Me If You Can). The film had a budget of approximately $250 million, and had an opening weekend gross in the U.S. of $191 million.
This film basically follows the storyline of the original film. Simba is the King’s son and future king of Pride Rock. JD McCrary voices the young Simba, and Golden Globe winner Donald Glover (Atlanta), the older Simba. Simba wants to grow up too quickly, and as a result, doesn’t always do what his father Mufasa, voiced by Oscar nominee James Earl Jones (The Great White Hope), wants him to do, which inevitably gets him into trouble. Nala, voiced by Beyoncé, is Simba’s best friend.
Scar, voiced by Oscar nominee Chiwetel Ejiofor (12 Years a Slave), is the King’s jealous brother, who wants to be King. We see him mislead Simba on a few occasions because has a plan to make himself the tribe’s leader, which calls for collaborating with a pack of hyenas.
I enjoyed the film, but there was just something missing from making it a truly special film. For one, there was not as much humor in this version as there was in the original. The exception was Timon, voiced by two-time Emmy nominee Billy Eichner (Funny or Die’s Billy on the Street) and Pumbaa, voiced by Emmy nominee Seth Rogan (Da Ali G Show). The music, even the songs you loved from the original film, seemed to fall flat. And perhaps most of all, the film seemed to lack in emotion.
The musical score is by Hans Zimmer, ten-time Oscar nominee and winner for The Lion King, with songs by Elton John, Tim Rice and some new music as well.
Content concerns in the film include dark and violent scenes that will be too scary for young children. Themes include the relationship between a father and a son, sacrificing for others, deception, and guilt.
The Lion King is a beautiful and entertaining film, but falls short of being truly special. The CGI is incredible, as is the cinematography by six-time Oscar nominee Caleb Deschanel (The Natural, The Passion of the Christ), and the film is probably worth seeing just for those reasons.

One of the books that I am using for my devotional reading this year is New Morning Mercies: A Daily Gospel Devotional by Paul Tripp. I’m really enjoying the book, and would like to share 25 of my favorite quotes through the first half of the year:

If you are looking for a good devotional book, check out Paul Tripp’s New Morning Mercies: A Gospel Devotional.

END_OF_DOCUMENT_TOKEN_TO_BE_REPLACED

We can learn much about leadership by studying the lives of Bible characters. Previously in our “Leadership Lessons from the Bible” series we have learned from Jesus , Joseph, Nehemiah and the Apostle Paul. Today, we’ll look at leadership lessons from the life of David.

Like all leaders, David experienced highs and lows, successes and failures. Here are 9 leadership lessons we can learn from the life of David:

END_OF_DOCUMENT_TOKEN_TO_BE_REPLACED 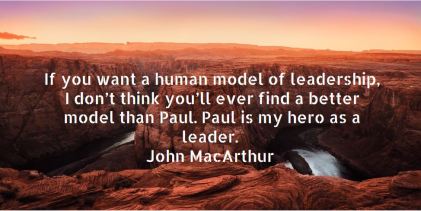 We can learn much about leadership by studying the lives of Bible characters. Previously in our series we have learned from Jesus, Joseph, and Nehemiah. Today, we’ll look at leadership lessons from the Apostle Paul. I recently re-read John MacArthur’s book Called to Lead: 26 Leadership Lessons from the Life of the Apostle Paul, in which he wrote “If you want a human model of leadership, I don’t think you’ll ever find a better model than Paul. Paul is my hero as a leader”.

END_OF_DOCUMENT_TOKEN_TO_BE_REPLACED

We can learn much about leadership by studying the lives of Bible characters. Previously in our series we have learned from Jesus and Joseph. Today, we’ll look at leadership lessons from Nehemiah.

Hand Me Another Brick, written by Charles Swindoll, was one of the books about Nehemiah I read as an early believer. Recently, I re-read Dave Kraft’s book Learning Leadership from Nehemiah, from which much of this article is indebted.

In chapter 1 of the book of Nehemiah, we are introduced to Nehemiah who was taken captive and was serving the king of Persia as his cupbearer. After hearing that the wall of Jerusalem had been broken down, and its gates had been destroyed by fire, we find him weeping, mourning, fasting and praying to the God of heaven for many days. He confessed the sin of his people and himself and asked God to bring him success in rebuilding the wall. END_OF_DOCUMENT_TOKEN_TO_BE_REPLACED 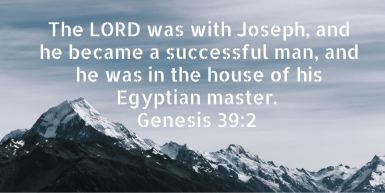 Joseph is one of my favorite characters in the Bible. Alistair Begg writes in The Hand of God that his story is a tale of jealousy, deceit, slavery, misrepresentation, injustice, lust, rivalry, and forgiveness. It is also a wonderful example of how God worked in Joseph’s life through all of its ups and downs. Alistair Begg tells us that Joseph was a life-sized illustration of Romans 8:28.

We are introduced to Joseph in Genesis 37:2 when he was only 17 years old. His father Jacob favored Joseph more than his other sons. Because of this, and poor judgement by Joseph in sharing a dream he had about his brothers bowing down to him, his brothers were jealous of him and hated him.  This resulted in them selling him into slavery (Genesis 37:28).

Begg tells us that there is no ideal place to serve God except the place in which He has set you down. END_OF_DOCUMENT_TOKEN_TO_BE_REPLACED

The greatest leadership model of all time was Jesus of Nazareth. I believe that the best way to lead is through servant leadership, which was demonstrated by Jesus. That’s how I’ve tried to lead in the business world, non-profit organizations and the church. Briefly, I can summarize leadership as:

In complete agreement with the Father and Holy Spirit, Jesus came to us with a purpose, which we read about in Luke 4:17-21:
And the scroll of the prophet Isaiah was given to him. He unrolled the scroll and found the place where it was written,

“The Spirit of the Lord is upon me,
because he has anointed me
to proclaim good news to the poor.
He has sent me to proclaim liberty to the captives
and recovering of sight to the blind,
to set at liberty those who are oppressed,
to proclaim the year of the Lord’s favor.”

And he rolled up the scroll and gave it back to the attendant and sat down. And the eyes of all in the synagogue were fixed on him.  And he began to say to them, “Today this Scripture has been fulfilled in your hearing.”

Jesus’ purpose in coming to us was to: