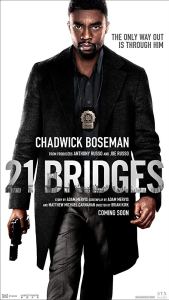 21 Bridges is an intense thriller about a police chase of two murderers of multiple police officers through the streets of Manhattan overnight. The film is well-made and exciting, but does include a significant amount of adult language and violence. The film is directed by Brian Kirk (Game of Thrones, Luther), and written by Adam Mervis and Michael Carnahan. The film had a budget of approximately $33 million.

The film begins with a young boy, Andre Davis, at the funeral of his policeman father who was killed in the line of duty. That young boy, played by Chadwick Boseman (Black Panther, 24, Marshall), would grow up to be a police detective in New York City, because it was “in his DNA”.  The film then moves forward nineteen years to the present day.