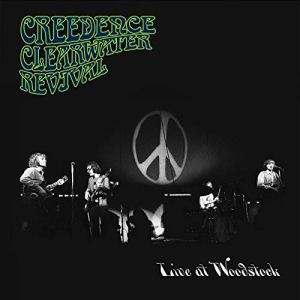 On Sunday, August 17, 1969, Creedence Clearwater Revival (CCR), arguably the hottest band on the planet at the time (their album Green River had just been released and their single “Bad Moon Rising” was on the radio), played the Woodstock Festival. The band had appeared on the Andy Williams television program in Los Angeles the night before. They then took a flight to Boston, a private jet to upstate New York, a helicopter ride to a nearby Holiday Inn and another one to the rainy and muddy festival site. They were scheduled to play in front of the crowd of 500,000 at 10:00pm that evening. But the Grateful Dead set went long, and they didn’t get on until about 1:00pm, when most of the crowd was asleep.  The band chose not to be included in the film or the soundtrack recording (rumors were that John Fogerty wasn’t happy with the set), but on the 50th anniversary of the Woodstock Festival, the entire eleven song set is finally being released for the first time.

After a less than enthusiastic introduction by the emcee, the band kicks into “Born on the Bayou”. The set includes CCR classics such as “Green River”, “Bad Moon Rising”, “Proud Mary” and “Suzie Q”, as well as some covers, and other CCR songs. The remastered version of the concert sounds excellent and shows off the band’s high energy and musical expertise, including Fogerty’s vocals and guitar solos. The entire set is excellent. Highlights include the cover of Screamin’ Jay Hawkins 1956 hit “I Put a Spell on You” and the closing three songs, Ray Charles’ 1958 “Night Time is the Right Time”, “Keep on Chooglin” and the encore “Suzie Q”, the latter two each stretching to more than ten minutes.
While it is a shame that it took 50 years for this recording to come out, it is an essential recording for CCR and Fogerty fans.

In the fall of 2017, NEEDTOBREATHE did something they had not done before – a fully acoustic tour.  Acoustic Live, Vol. 1 features twelve songs from that tour. It is their second live album in just three years. Live From The Woods was released in April, 2015, and the band has released just one full-length album 2016’s Hard Love, and two EPs 2017’s HARD CUTS: Songs from the H A R D L O V E Sessions and 2018’s Forever On Your Side Niles City Sound Sessions EP since then. Five of the twelve songs included on the new live project were also included on Live From The Woods.
The twelve songs are pulled from five of the band’s albums, plus an EP, and one, “Stand By Me”, has not previously been recorded by the band, so there is good representation from the band’s career. The album, like Live From The Woods, shows just how good a live band NEEDTOBREATHE is. The album also includes some of the band’s comments from the stage.

Back Again – Mac Powell and the Family Reunion
****

Mac Powell was the lead singer for the Christian band Third Day for 25 plus years. During that time, the band sold 10 million albums, earned 4 Grammy Awards and 24 Dove Awards. Powell formed his new band in 2018 after Third Day played its final show. The Family Reunion is a band that has developed over the past several years from musicians that have been recording and playing live with Powell in support of his two solo albums, his self-titled 2012 debut and 2014’s Southpaw.
Back Again is southern roots and American rock music, propelled by Powell’s powerful voice, that pays tribute to the early musical inspirations from his childhood. This is not a Christian music album, but there is Christian content in “Heaven” and “What I Came Here For” and there are no objectionable lyrics on the album. It was recorded in Atlanta and produced by Jason Hoard.

Below are a few comments about each of the fifteen songs:
Back Again – This is an excellent opener. It’s an upbeat southern rock song with driving guitars and drums, with Powell’s strong vocal. He was raised to ramble and born to run. He’s always been a traveler and made to move. The only thing that will make him settle down is to come on back to her.
Flood Waters – This is a toe-tapping guitar-driven song. A storm is coming. There will be earthquakes, lightening and flood waters rising. You (God? A woman?) will be the only one he’ll be looking for. There are some nice backing vocals and a guitar solo mid-song.
Whoo! – This song features guitar and drums. It’s a fun song about celebrating the weekend, after a long week of work. The song features country artist Craig Morgan on vocals and a guitar solo mid-song.
Watermelon Rind – This song features guitar and drums, with some organ and a brief guitar solo. The joyful song is about remembering when he was a little boy down at the river swimming with his cousins and sister. When they got hungry his mama got them a watermelon and they ate it down to the rind.
Red On A Rose – This love song has a slower pace. It features acoustic guitar, keys, light drums and backing vocals. Sometimes life doesn’t work out as planned, but she can count on him. He’ll be her shelter, hold her close and never let her go.
I’m Beginning To Wonder – This song features a driving guitar sound and backing vocals. She’s been pulling him down and treating him so bad for so long. He’s beginning to wonder if she ever did love him.
Going To California – This easy-going love song is driven by pedal steel guitar. He’s going to California, find a diamond and buy it for a song. When she wakes up in the morning, he’ll be gone, but he’ll come back home to her in Georgia. The song features a guitar solo mid-song.
I Could Get Used To This – This is a slower paced love song that builds. It features light guitar and drums. He’s never been the type to stick around for too long. But she’s the only one whose made him want to stay. He could get used to staying with her rather than running around.
Tiptoein’ – This is an upbeat fun swamp rock song featuring banjo, guitar, drums and backing vocals. From the time he was five, he was tiptoeing. Now he has kids and he can hear the kids upstairs tiptoeing.
Heaven – This is a slower paced song featuring light guitars and backing vocals that gradually builds. The world’s going crazy and sometimes it seems nothing is left here for him. But all that he wants and needs is right there where he longs to be (in Heaven). The song features an excellent guitar solo near the end of the song.
What I Came Here For – This song has an acoustic, unplugged sound, featuring banjo that builds toward the end. He’s been running. He doesn’t know what he is chasing but he knows there is something more. One of these days, he prays, he’s going to open up the door and find what he came here for. He’s looking for a light to guide his way. Thematically, it reminded me of U2’s “I Still Haven’t Found What I’m Looking For”. A highlight.
Mess of Me – This song begins with acoustic guitar, and is a toe-tapper, instantly likeable. First time he saw her he fell in love. But he’s running out of time to get her to love him. The temperature is rising and it’s hard for him to breath. He’s dizzy, and it’s hard for him to see. It features a guitar solo mid-song. A highlight.
Settlin’ Down – This song features driving guitar and drums and a sound not unlike a Springsteen solo record. He wants to settle down, get a little place, go out dancing on a Saturday night, talk to dawn and have a couple of kids.
Sittin’ Here Talkin’ With You – This love song has a slower pace with accordion, acoustic guitar and light drum. There is nothing he would rather do than to hold her hand on the front porch swing. It’s his favorite thing sitting there talking with her. The song features a guitar solo mid-song.
Mississippi – This foot-stomping song is driven by guitar and drums. She treats him bad and he’s going to leave. By the time she gets to “10 Mississippi” he’ll be long gone. 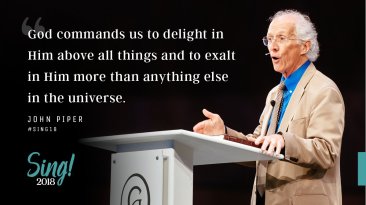 How deep the Father’s love for us,
How vast beyond all measure,
That He should give His only Son
To make a wretch His treasure   Stuart Townend

What love could remember, no wrongs we have done
Omniscient, all-knowing, He counts not their sum
Thrown into a sea without bottom or shore
Our sins they are many, His mercy is more   Matt Boswell and Matt Papa

Who is like the Lord our God?
Strong to save, faithful in love
My debt is paid and the vict’ry won
The Lord is my salvation   Keith Getty, Kristyn Getty, Nathan Nockels and Jonas Myrin

This week’s song of the week is by former Third Day lead singer Mac Powell. He is back with a kickin’ new album Back Again with his new band the Family Reunion. Watch the official music video for the title track, or the lyric video.   I dare you not to tap your toe!