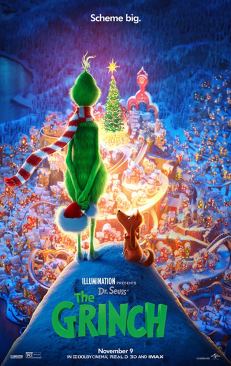 The Grinch is a modernized version of Dr. Seuss’ much-loved tale of the Grinch who tried to steal Christmas. The film is directed by Emmy winner Yarrow Cheney (Dilbert) and Scott Mosier. The screenplay is written by Michael LeSieur (Keeping Up with the Joneses) and Tommy Swerdlow, based on the book by Dr. Seuss How The Grinch Stole Christmas.
This film takes quite a few liberties with the Dr. Seuss’ story that we are familiar with. The Grinch, voiced by Oscar nominee Benedict Cumberbatch (The Imitation Game, Sherlock, Dr. Strange) is not as mean as the one we met in the classic 1966 television special How the Grinch Stole Christmas.  This Grinch is lonelier and sadder, than he is mean, though he certainly still has a mean streak in him. He lives with his under-appreciated dog Max inside a cave on Mount Crumpet, overlooking Whoville. I enjoyed the scenes of how each morning would start with Max making the Grinch’s coffee and bringing it up to his bedroom using the inventions and contraptions that the Grinch has built for his daily needs.
After running out of food because of his emotional over-eating, the Grinch and Max must go down the mountain to Whoville to pick up groceries. In the village he runs into the friendly Mr. Bricklebaum, voiced by Emmy winner Kenan Thompson (Saturday Night Live), who has the house with the most Christmas decorations. In fact, this year, the goal in Whoville is to make Christmas three times bigger than its ever been before, which aggravates the Grinch even more.
He also meets Cindy-Lou Who, voiced by Cameron Seely (The Greatest Showman), who is desperately trying to mail a letter that contains a very special request to Santa Claus.  The Grinch assumes this is for a gift for Cindy-Lou, but it is actually something for her hard-working single mom Donna, voiced by Emmy nominee Rashida Jones (Hot Girls Wanted).
While in Whoville, the Grinch passes by carolers singing “God Rest Ye Merry Gentlemen” (well-sung by Pentatonix), which includes some very clear lines about Jesus, and the real meaning of Christmas:

The Grinch hates Christmas and we are told why in a flashback. He decides that he will take the joy of Christmas away from the people of Whoville. So, the Grinch, Max, and a very large reindeer named Fred, make plans to steal all of the Christmas decorations and gifts from the people of Whoville.  That will certainly show them, and take their joy away.
By modernizing the story to appeal to a new generation of viewers (single mom, more diverse characters, more modern music, different ending, etc.), the film lost a lot of its magic and appeal. Most of all it fell flat because it wanted you to feel compassion for the Grinch.  He wasn’t a ‘vile rotter’, just lonely and misunderstood.  What’s next?  A kinder, gentler Scrooge?  The new film leaves out some of the best of lines from the 1966 version.  Pharrell Williams serves as narrator, but he isn’t given much to work with.
The animation was good, as was the musical score by Danny Elfam. But the much-loved song “You’re a Mean One, Mr. Grinch”, sung by Thurl Ravenscroft is unrecognizable as performed by Tyler, the Creator.
There are no significant content issues in the film. Themes include friendship, family, loneliness, kindness and love.
The Grinch is a film that the entire family can enjoy. And in our divisive country, we certainly can’t get enough messages about kindness. I was really looking forward to this film. However, in trying to appeal to a new generation of viewers, the film loses much of its magic, and I found it a bit boring. My suggestion would be to skip this one, which felt long at 90 minutes, and gather the family in the living room this season and watch the classic 1966 version, which runs only 26 minutes.