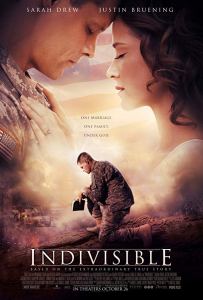 Indivisible is based on the true story of U.S. Army Chaplain Darren Turner and his family. The film is directed and co-written by David G. Evans (The Grace Card).  Cheryl McKay (The Ultimate Gift) and Peter White wrote the screenplay with Evans.
Justin Bruening (Grey’s Anatomy) stars as Darren Turner. He had recently completed seminary and basic training as an Army chaplain and just arrived at Georgia’s Fort Stewart with wife Heather, played by Sara Drew (Grey’s Anatomy) and their three young children, when he found out that he was being deployed to Iraq for the Operation Iraqi Freedom’s 2007 troop surge.  Although in a state of shock at how quickly things were happening, Darren and Heather both agree that they had been called to this ministry. That didn’t make things any easier, however.
In Iraq for fifteen months, Darren is eager to provide spiritual support for the hurting troops he is assigned to, though he admits he doesn’t know exactly how to do that. He carries and hands out “Armor of God” coins. He receives encouragement from his commanding officer Jacobsen, played by Eric Close (Nashville) and the helpful Sergeant Peterson, played by Skye P. Marshall (Grey’s Anatomy). But he is challenged by his neighbor Michael Lewis, a veteran of multiple tours, played by Jason George (Grey’s Anatomy) and rifleman Lance Bradley, played by Tanner Stine (The Thundermans), who ask difficult questions about God. Eventually, he grows closer to both men. But the horrors of war and a painful loss put Darren’s faith to the test.
The film does a good job balancing the parallel stories of Darren away at war and Heather and the children back at home. While Darren is in Iraq, Heather, who has a career as a photographer, volunteers on the Readiness Committee, comforting peers when they are notified of the loss of their husbands in the war. The film shows that while Heather doesn’t face the physical danger that her husband does, her life is every bit as difficult. When they do talk on the phone, Darren doesn’t share with Heather what he is experiencing in Iraq.
When he returns home Darren is a different man, suffering from post-traumatic stress syndrome (PSTD). This puts an incredible strain on their marriage. Eventually Darren and then later Darren and Heather get counseling from the wise and older Chaplain Rogers, played by Michael O’Neill.
Themes in the film include marriage, the difficulty of serving in war and transitioning back to civilian life, doubt, fear, anger, patriotism and death.
Content concerns include some realistic war violence. The film does not include adult language that is usually found in a war film. The film features as solid cast, many of whom have worked on the Grey’s Anatomy television series. Sara Drew gives a standout performance as Heather Turner. The movie makes good use of music, including songs from NEEDTOBREATHE and TobyMac.
Indivisible is about a family’s battle to stay together after U.S. Army Chaplain Darren Turner returns home. It is not an easy film to watch due to the subject matter, but is a step up in production value, writing and acting over most Christian films.