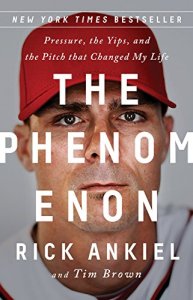 The Phenomenon: Pressure, the Yips, and the Pitch that Changed My Life by Rick Ankiel and Tim Brown.  Public Affairs. 307 pages. 2017
****

Many baseball fans will be aware of Rick Ankiel who was a top pitching prospect for the St. Louis Cardinals. In his rookie season at the age of 21, he started a playoff game for the Cardinals with great anticipation. His career had such promise. As a left-hander, he was being called the “next Sandy Koufax”. Then it happened. He writes that on a day when he asked his arm to be more special than ever, it deserted him. And for the next five years he chased the life he wanted, the one he believed he owed to himself, and the one he probably believed the world owed to him.
I was familiar with his story, but not the details that this honest book will give you. I came away with a new compassion for what he went through as he tried to understand what had happened to him and possible cures so that he could get back to being an elite pitcher with a great future. What happened to Ankiel is called “the Thing” because there’s no diagnosis and no cure. It is also called the monster, the yips and the phenomenon.
But there is much more to his story than what happened on the pitching mound in St. Louis on that fall afternoon.  He writes of his volatile father, who was often drunk, in trouble with the law and abusive to Ankiel’s mother. They were never married and he never acted as though they were, which Ankiel writes explains his half-sister— a whole other family—across town as he was growing up.
He writes about the nightmares, awake in the dead of night, waiting for his heart to settle, cursing the thing that would not leave him alone, not even in his sleep. He tried to drink and medicate those nights away. He tried to pitch them away in the minor leagues for the better part of four years. But four and a half years after “the pitch”, a pitch that even all that time later seemed so innocent, he retired at age twenty-five. His career was over almost before it had started, and yet he was not at all unhappy about it.  But within three hours of retiring as a pitcher, the Cardinals wanted him back – as an outfielder.
Ankiel returned to the major leagues as an outfielder on August 9, 2007, a game I remember watching. Incredibly, he hit a three-run home run in that game. Cardinal manager Tony La Russa stood by the dugout steps, applauding and smiling. Nobody could ever recall seeing that before. Years later, La Russa would recall it as one of the happiest days of his life. As a hitter, Ankiel was soon called “the Natural.”
Ankiel writes of Dr. Harvey Dorfman, a sports psychologist, who played a very important part of his life. They met in the spring of 2000, and Harvey became one of his best friends, in many ways replacing the real father he despised. Ankiel writes that Harvey saved careers, that he probably saved lives, or at least made them exceedingly more livable. He became what Ankiel had hoped for in a father and what his two boys should’ve had in a grandfather.
Ankiel retired for good after the summer of ’13, when the New York Mets released him. All in all, he played for six teams in six cities—St. Louis, Kansas City, Atlanta, Washington, Houston, and finally New York. Seven years a pitcher, seven years not. He then took a job with the Washington Nationals as their Life Skills Coordinator.
He states that he has written this book about his story for his two sons so that when they are old enough and curious enough they will hear it from his perspective. The book does include a fair amount of adult language and is certainly hard to read at times. Ankiel’s story is sad, tragic and ultimately triumphant. He is a survivor; his life story would make a great movie.
Sadly, he does not speak of having any faith. One wonders how that would have helped him in his times of darkness. END_OF_DOCUMENT_TOKEN_TO_BE_REPLACED