My Review of CREATED EQUAL:  CLARENCE THOMAS IN HIS OWN WORDS
****

In this documentary, written and directed by Michael Pack, Supreme Court Justice Clarence Thomas tells his life story, beginning with his birth in 1948 in Pin Point, Georgia, where his family spoke the creole language of Gullah. His mother would have four children by the time she was 20, and his father left the family early on. Later, after their home burned down, the family would move to Savannah, Georgia. Thomas speaks of the difference between rural poverty and urban poverty, indicating that the former was to be preferred. His mother, who worked as a maid, took Thomas and his brother to live with the boys’ grandparents, who lived in a nice area of Savannah.
Thomas’ grandfather was illiterate, but taught Thomas and his brother discipline and a good work ethic. Believing he was called to be a priest, Thomas enrolled at Conception Seminary College at age 16, where he was the only African American. He would leave he seminary after he heard a fellow student make an ugly comment about Martin Luther King Jr. after he was shot. When he returned to his grandparent’s home, his grandfather showed him the door, telling him he was no longer welcome there.
Thomas would enroll at the College of the Holy Cross, which was founded in 1843 by the Society of Jesus (Jesuits) in Worcester, Massachusetts.  It was there that he helped found the Black Student Union and got involved with a group of Black Marxists. He went on to Yale Law School, got married and had a son. The marriage lasted only thirteen years before ending in divorce. Thomas was noticeably uncomfortable discussing his first marriage in the film. He would later marry Virginia Lamp, who appears in the film, in 1997. END_OF_DOCUMENT_TOKEN_TO_BE_REPLACED

Charleston, The Rebel Flag and Gay Marriage by Tammy Pence

Do you remember Johnny Carson as Carnac the Magnificent? He would make diverse statements and ‘magically’ open an envelope to tell you the answer as to how they tied together.

I’ve been mulling over these three things, and believe they reflect how Christians should respond to the recent Supreme Court decision. In case you’ve been having a screen-fast (abstaining from using TV, phone, computer screens) here’s a short synopsis from Allen West:

…. five justices on the SCOTUS (Supreme Court of the United States) redefined what marriage is in America and also found the time to violate the concept of federalism. They decided that an individual’s behavioral choice was grounds to create a new “right” in the U.S. Constitution. … The Court used Section 1 of the Fourteenth Amendment to justify its argument, which reads: Amendment XIV Section 1. All persons born or naturalized in the United States, and subject to the jurisdiction thereof, are citizens of the United States and of the state wherein they reside. No state shall make or enforce any law, which shall abridge the privileges or immunities of citizens of the United States; nor shall any state deprive any person of life, liberty, or property, without due process of law; nor deny to any person within its jurisdiction the equal protection of the laws.

It will be interesting to see how the gay agenda proceeds from here, now that they feel powerfully affirmed. At one time in recent history they felt oppressed. But now will they take their power to oppress others or will they use their past experience to bring healing and unity, not boycotts and harassment? We shall see. Mark Oppenheimer’s recent article in Time magazine entitled, “Now’s the Time To End Tax Exemptions for Religious Institutions” might be a sample of coming attractions.

But take a deep breath! Our calling as Christians hasn’t changed one iota, and is not dependent upon circumstances or the government or its laws. See Tim Brister’s article, “How Christians Live in Post-Christendom”.

We were given a horrible yet wonderful example in the murders in Charleston, SC. What were the families and community’s reactions to their loved ones being gunned down? The members of the media were salivating, hoping to see protests, riots, looting and violence; these were previous responses to people being killed by white police officers.

But what did we see happen in Charleston? People gathering in churches to pray together and support one another; lamenting the loss of loved ones together. An Outpouring of Love, Grace, Peace and even Forgiveness.

The media didn’t get their expected story, so they had to create it. Enter the Confederate flag controversy, along with the usual anti-gun protests. All of a sudden the focus is taken off of families grieving together and put onto a controversy. (By the way, are there any news stations that just report the news, not just spend the entire day hammering on one news story?)

Diversion from focusing on the good is a classic tool of the devil. It even happens in churches – you could be sitting in a meeting, excited about setting the vision for the future, when someone chirps up to get you off track onto controversies within the church. Next thing you know, hours have gone by, you’re deflated and tired, and never once talked about the church’s vision.

God is still sovereign (Proverbs 21:1 ~ “The king’s heart is a stream of water in the hand of the LORD; He turns it wherever He will.”). We as Christians are still to be salt and light, regardless of circumstances and current controversies: Speaking the truth in love – not wavering from Biblical truth but continuing to love our neighbors as ourselves. While giving the Sermon on the Mount, Jesus preaches to us about the Beatitudes in Matthew 5. In verse 16 He says: “In the same way, let your light shine before others, so that they may see your good works and give glory to your Father who is in heaven.” 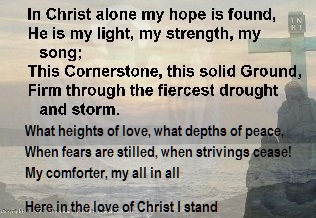