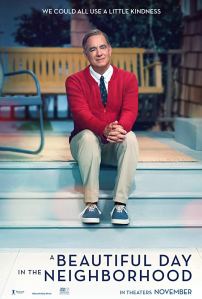 A Beautiful Day in the Neighborhood, rated PG
***

A Beautiful Day in the Neighborhood follows 2018’s excellent (and superior) documentary about Fred Rogers, also known as “Mr. Rogers”, Won’t You Be My Neighbor? The new film, inspired by the real-life friendship between Fred Rogers and Esquire magazine journalist Tom Junod, is well acted and has several positive messages, but is also slow and more melancholy than you might expect.
The film is directed by Marielle Heller (Can You Ever Forgive Me?), and written by Emmy nominee Micah Fitzerman-Blue (Transparent), and Emmy nominee Noah Harpster (Transparent). The film is based on the Esquire magazine article “Can You Say….’Hero’? by Tom Junod.
Lloyd Vogel (the fictitious name for the Tom Junod character), played by two-time Golden Globe nominee Matthew Rhys (The Americans), is a cynical Esquire magazine writer, who normally writes hard-hitting investigative articles. In 1998, Vogel is assigned by Ellen, his editor, played by Oscar winner Christine Lahti (Lieberman in Love), to write a 400-word piece on Fred Rogers, played by two-time Oscar winner Tom Hanks (Forrest Gump, Philadelphia), for the magazine’s issue on heroes. She states that writing the piece will help Vogel’s reputation for being too hard on his subjects. END_OF_DOCUMENT_TOKEN_TO_BE_REPLACED

Can You Ever Forgive Me? is now available on home video, and is based on the true story of New York writer Lee Israel; it’s driven by strong acting performances by the two lead characters. The film has received three Oscar nominations, but does have some content concerns.
The film is directed by Marielle Heller (The Diary of a Teenage Girl). It is written by Nicole Holofcener and Jeff Whitty who both received Oscar nominations for the film, which is based on the 2008 book Can You Ever Forgive Me?: Memoirs of a Literary Forger by Lee Israel, who died in 2014.
As the film begins in 1991, Lee, played by Melissa McCarthy (St. Vincent, Bridesmaids), is drinking at her desk at work and after two younger women walk by and make a derisive comment to her, she becomes verbally abusive to co-workers and her boss. She is promptly fired. Her life is a mess. She is now without a job, three months behind on her rent, and can’t get her cat the treatment it needs because she has an overdue balance at the veterinarian’s office which she can’t pay. She is an author of biographies that don’t sell, notably of Fanny Brice. Marjorie, her literary agent, played by Golden Globe nominee Jane Curtin (Kate and Allie, Saturday Night Live), won’t even return her calls. When Lee attends a party that Marjorie is hosting just so that she could talk to her, Lee ends up stealing another party goer’s coat on the way out.   Yep, she’s a real charmer. END_OF_DOCUMENT_TOKEN_TO_BE_REPLACED