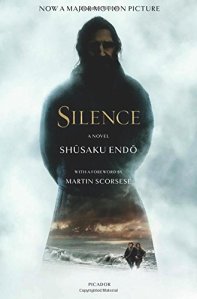 The new film Silence, from director Martin Scorsese is based on this 1966 novel of historical fiction written by Japanese author Shusaku Endo. Scorsese, who writes the Foreword, had wanted to make a film of this book for many years. In the Foreword he writes about the problem of Judas, a theme that will come up throughout this book.
The novel is primarily written in the form of a journal and also in the third person by its central character, Father Sabastian Rodrigues, a Portuguese missionary. Father Rodrigues and his companion Father Francisco Garrpe arrive in Japan in 1639; the Christian church is underground to avoid persecution. Rodrigues has travelled to Japan to investigate reports that his former teacher and mentor, Christovao Ferreira, has committed apostasy.  The priest had not been heard from since 1633 when he was last seen in Nagasaki.
Their contact in Japan is a drunken man named Kichijiro. He denies when asked if he is a Christian. He is the Judas character in this book. He will show up again and again in the story.  Just when you think you can trust him, he will disappoint you, and then he shows up again. Can he be trusted? Or, will he betray the priests and turn them into the Japanese authorities? The Judas theme is key to this book. Father Rodrigues will often refer to Jesus’ words to Judas, “What thou must, do quickly” (John 13:27).
Father Rodrigues will also compare his situation with that of Jesus. The magistrate, Inoue, who is responsible for the interrogation and torture of all captured Christians, is the Pilate character in the book.
The book includes themes of faith, doubt, silence (of God, the sea, land, night and people), solitude, pain, betrayal, strength, weakness and martyrdom. Does God even exist? He has been silent in the midst of the persecution of the Japanese Christians.
The subject of apostasy is another key to this story. The Japanese not only want the peasant Japanese Christians to deny their faith by trampling on an image of Jesus (referred to as a fumi-e), no, they want priests themselves to commit apostasy. If they don’t, the peasant Christians will be tortured to death.
The book is well-written and very descriptive. You can feel the heat, rain, and the insects that Father Rodrigues encounters in “the swamp”, as Japan is referred to in the book. Tension builds as Father Rodrigues encounters his former teacher Father Ferreira.
SPOILER ALERT!  *** Ferreira has indeed apostatized, taken on a Japanese name, taken on another’s wife and children, and is writing a book to refute the teachings of Christ. He tells Rodrigues that he was to get him to apostatize. He goes on to tell Rodrigues why he had apostatized. ***
We go on to read about what happens to Rodrigues. Will he apostatize? Will he ever hear the voice of God, or will he remain silent?
As I read this book I wondered if I would be able to keep from denying Christ if my wife was being tortured. I pray that I would. 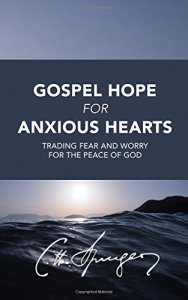 This is the second book I’ve read from the new Rich Theology Made Accessible series, the first one being on prayer by John Calvin.  The book includes ten wonderful sermons by the great Reformed Baptist Charles Spurgeon, preached from the Metropolitan Tabernacle pulpit in London where he served for 38 years. Among the topics covered in these sermons that will encourage believers are care, anxiety, peace, fear and rest. My only suggestion for improvement would be an Introduction to the book, giving the reader some context to these wonderful sermons – when they were preached, why these particular sermons were chosen, etc. I highly recommend this wonderful collection of sermons by Spurgeon, which are great for devotional reading. END_OF_DOCUMENT_TOKEN_TO_BE_REPLACED