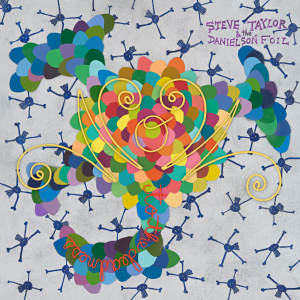 Wow to the Deadness – Steve Taylor and the Perfect Foil
****

Steve Taylor has been one of my favorite artists since his 1983 EP I Want to Be a Clone. I was a new believer, and his witty, honest and creative way of expressing his beliefs and the hypocrisy he saw in the church really resonated with me, and still does. Since that time, I’ve purchased all of his music (solo, Chagall Guevara, Perfect Foil), and seen him in concert several times. Hey, I was even a member of his Clone Club!

In addition to being a singer and songwriter, he is also a film director (The Second Chance, Blue Like Jazz), songwriter (Newsboys), producer “Kiss Me” by Sixpence None the Richer, and record company owner (Squint). Taylor’s excellent 2014 album Goliath, with the Perfect Foil (consisting of Peter Furler, Jimmy Abegg and John Mark Painter), was his first since 1993’s Squint. So it is a joy that Wow to the Deadness comes just two years later.

To support Goliath, Taylor and the Perfect Foil toured with Danielson. I was not familiar with Danielson. Danielson’s Wikipedia article describes them as an American rock band that plays indie pop gospel music led by Daniel Smith.

The friendship resulted in this collaborative effort as they entered the Electrical Audio studio in June 2015 with engineer Steve Albini (Nirvana, Foo Fighters) using strictly analog gear. This EP, with cover art by Smith, is the result, which Albini described as being “really raucous and really great”. Smith states the recording rocks, but also moves around a bunch. He has stated “It can be delicate, but it’s rare. It mostly demands much, but it’s very inclusive and would really appreciate some singing and clapping along.”

The resulting product is something different from what Taylor’s fans may be accustomed to. But, we know that he has always been creative and pushed boundaries (who can forget the stir over the cover art on I Predict 1990 or the concern over his song “I Blew Up the Clinic Real Good”?

According to Taylor, their only rule was that if it sounded like something they’d already done, they would throw it out. He felt that they ended up with a recording that is not easily classifiable and hopefully doesn’t sound disposable.

Below are a few of my thoughts about each of the six songs after listening to each several times. Taylor handles most of the lead vocals with Smith handling some of them, plus backing vocals.

Wow to the Deadness – Begins with acoustic guitar before it takes off. Smith wrote most of the lyrics. Smith sings a response “We have a winner”, to Taylor’s lines. For example:

Wait up Downstep – This one also begins with an acoustic guitar. Smith sings a recurring Wait and Step and Wait.

Give me joyful liberty
Transcending up in awe of
How you go, oh can I know
Let us be known by our love

The Dust Patrol – Opens with a blistering guitar. The drums lead into Taylor’s lead vocal. The song slows down in the middle, with Smith taking over, before some great guitar work turns it back over to Taylor’s machine gun like delivery.

Favorite lyric: We’re gonna roll your thunder. (Could this be a nod to Dylan’s Rolling Thunder Revue?)

Nonchalant – Again opens with acoustic guitar. This is a mid-tempo rocker, slowing things down a bit after the previous song.

Favorite lyric: Turn the cheek that bruised, til’ the purple drains

A Muse – This is a scorching rocker with great drums, guitar and Taylor’s defiant vocals.

Drats – The song features more of Smith’s vocals than any on the EP as he and Taylor share lead vocals.

Be still and speak
Day by day
My delight
My delight

And just like that, this unexpected collaboration is over. Here’s hoping it’s not the last we hear of Steve Taylor and the Danielson Foil. I’d love to hear these songs in concert.

You can pre-order the EP, to be released February 5, at Amazon here.

Here is the promo video for the EP. You can watch the video of Wow to the Deadness here. (Apologies for the bad word in the article).

They out here prostitutin’ kiddos
Fill they pockets with dinero
Pedophiles, pitiful
Sell a child to centerfold
Take they innocence, put in on the internet
Purities tainted, dignities shaken
Enslavin’ the soul of all of these babies
And freedom got a price nobody payin’
Makin’ money, American dream ain’t it, nah!
It’s a nightmare, don’t fight fair for white here
Benjamin Franklins, killin’ we hate for him
Write a song justifyin’ the lies we take for him, hold up
They ain’t with me, I’m willin’ to wait for ’em
Lil’ me sat up on the porch, thinkin’ dolla bills
Stomach filled from another meal that my momma killed still
I can’t keep still
I’d probably steal to keep a couple of Nike checks on the back of my heels
Grab my back on and pills
I need a stack of them bills
They say we slaves to the money
I guess we back in the field
I’ma go pursue my happiness, they told me it was free
But I’m still payin’ for it, I’m indebted to this thing
Heard a prophet say the profit, don’t focus on makin’ change
Just focus on tryna be it and maybe you’ll make a gain
Maybe you’ll free the slaves, maybe you’ll bring a change
The destinations are different but everyone’s on the train

Freedom isn’t free
But I still, I still believe in my freedom
So my mind can see
Please let me be free, please let me
Freedom

I’m out here chasin’ this freedom
They out here choppin’ my feet off
And if they catch me I’m Toby, but I ain’t ’bout to believe it
King Kunta, king of coonin’, or Kenan & Kel
Rather rot in a jail cell than be up in hell, well
Well done, is you cookin’ or is you hearin’ your Father say, “Well done”?
Is He lookin’ at all your honors?
Modestly I’ll be honest, I’m hangin’ onto that promise
Cause honestly I ain’t really been everything that I oughta
Oughta be on my Harriet, bury me next to Honest Abe
Here’s lies another man murdered for tryna free the slaves
I gave Chief Keef my number in New York this summer
I told him, “I could get you free”, I’m on my Nat Turner
Back burner, cookin’ up a fat burger
While we shuck and jive to a song about a crack murder
Know we need a change but we threw it on the stage
Got some money and a soul and neither one of us saved
Slaves, get free