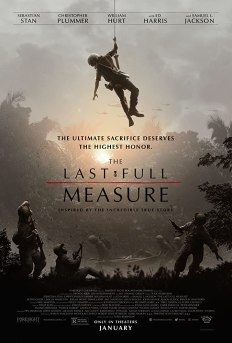 This film is inspired (some of the characters and plotline are fictionalized), by the true story of a Vietnam War hero, and the years long quest to get him the prestigious Congressional Medal of Honor decoration for his actions, which saved as many as sixty lives, during what was known as “Operation Abilene”. The film, rated “R” for war violence and adult language, and featuring an all-star cast, was written and directed by Emmy winner Todd Robinson (The Legend of Billy the Kid). The film’s title is taken from Abraham Lincoln’s Gettysburg Address, where Lincoln talks about those who have made the ultimate sacrifice, “from these honored dead we take increased devotion to that cause for which they here, gave the last full measure of devotion.”
William Pitsenbarger, known as “Pits”, is played by Jeremy Irvine (War Horse). “Pits” was a U.S. Air Force pararescue medic. He flew more than 250 rescue missions during the Vietnam War. On April 11, 1966, his day off, he volunteered to board one of two Kaman HH-43F Huskie helicopters dispatched to extract a half-dozen or so wounded soldiers pinned down in a firefight near Cam My, a rural area of Vietnam located 35 miles east of Saigon. When his helicopter arrived over the battle during “Operation Abilene”, he was lowered through the trees to treat the men injured during the brutal attack on the ground. But rather than returning to the helicopter to leave the scene, he chose to stay, and was subsequently killed in the battle. END_OF_DOCUMENT_TOKEN_TO_BE_REPLACED

Get Out is a creative, well-made film about race combined with satire, horror and comedy that will make you want to scream at the main character during the film, “Get Out”!
This film is written and directed by Jordan Peele (Comedy Central series Key & Peele), who has cited the original 1968 Night of the Living Dead film as an inspiration for making his feature film writing-directing debut because that film had an African American protagonist and dealt with serious racial issues inside the framework of a horror movie. He has also stated that he first got the idea for the film during 2008 Democratic primary discussions about whether an African American or a woman was more deserving of the presidency. He then went on to explain that he further conceived the movie as a twist on the 1975 movie The Stepford Wives, in which suburban husbands replace their rebellious wives with compliant robots.  This satire on interracial relationships cost just $4.5 million to make and is receiving an incredible 100% rating on RottenTomatoes.com by film critics. The film is produced by Jason Blum who also produced Split, which recently was the number one film for three consecutive weeks.
Daniel Kaluuya (Sicario), stars as 26 year-old Chris, an African-American photographer who has been dating Rose, (Allison Williams, Girls television series) who is white, for five months. The couple is visiting Rose’s parents – neurosurgeon Dean Armitage (Bradley Whitford, The West Wing) and psychiatrist Missy Armitage (two-time Oscar nominee Catherine Keener) – at their beautiful but remote lake house estate, for the first time. Chris is nervous about their reaction to him being an African-American, but Rose assures him that it won’t be a problem as her parents are not racists. And initially it appears that she is right, as he initially begins to feel welcome.
But then Chris begins to get increasingly uncomfortable, beginning with Rose’s brother Jeremy (Caleb Landry Jones). He notices that the other African-Americans in the home – groundskeeper Walter (Martin Henderson) and maid Georgina (Betty Gabriel) – are acting strange.  Then Missy is intent on wanting to hypnotize Chris. Later, we see Chris attending an awkward party with the family’s friends, all white, along with one black man Andrew (Lakeith Stanfield) who is also acting strangely. Chris then calls his best friend TSA Agent Rod (LilRel Howery) – who adds a good deal of humor to the film – to express his concerns. Does he have reason to be concerned or is he just paranoid?
Race plays a central role in this film at a time when race relations in our nation are unfortunately as poor as they have been for a long time. Rose’s parents would not consider themselves to be racists, but they use racial stereotypes, as they try to connect with Chris. All of their white friends at the party are also interested in Chris because of his race. Why?
This creative genre blending film (horror, comedy, satire) was very well done. As a white man, I felt uncomfortable watching it, which is probably what Peele would want me to feel. Michael Abel’s music score is very effective in building the suspense.
The film is rated “R” for violence, bloody images, and a significant amount of adult language, including several abuses of God’s name and sexual references.