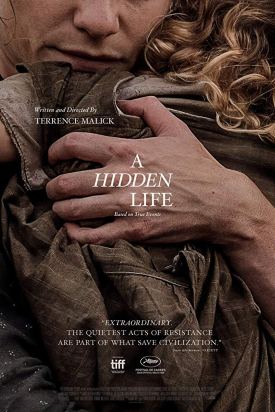 A Hidden Life, now available on home video, is a powerful film based on true events about a humble and devout Austrian farmer who refused to swear an oath of loyalty to Hitler when called to serve for Germany in World War II. The film, which runs just under three hours and moves along slowly, is beautifully filmed, is thought-provoking, demonstrates the strong faith of the two lead characters, and is one of the best films I’ve seen in some time, though it was largely passed over during awards season. The film was written and directed by three-time Oscar nominee Terrence Mallick (The Tree of Life, The Thin Red Line). The title of the film comes from a line in George Eliot’s novel Middlemarch.
“..for the growing good of the world is partly dependent on unhistoric acts; and that things are not so ill with you and me as they might have been, is half owing to the number who lived faithfully a hidden life, and rest in unvisited tombs.”

The film is about Franz Jägerstätter, played by August Diehl (Inglorious Basterds), a Catholic Austrian farmer. Franz is married to Fani Jägerstätter played by Valerie Pachner. As the film begins, we see Franz serving in the German army, but he doesn’t see combat. During this time, he begins to believe that participation in the war would be a sin. He is allowed to return home, where he and Fani start a family that will grow to three young girls. We see them working hard on their farm, using scythes to cut wheat and bale hay, and raising livestock in the small Austrian village of St. Radegund, near the German border. Franz has a quiet but strong faith. He serves as a sexton at the local Catholic church, without pay. Franz’s mother Rosalia Jägerstätter, played by Karin Neuhäuser, and and Fani’s sister, Resie Schwaninger, played by Maria Simon, come to live with them.
When the war continues, there is fear that Franz will be called back to fight for the German army. His feelings about Hitler begin to spread when he refuses to return the Nazi salute of “Heil Hitler!” to those he passes by. As a result, he and his family begin to be ostracized by the members of the village. We feel the tension each time the bike bell rings with the rider carrying the summons to serve. Eventually, in 1943, Franz receives his notice. END_OF_DOCUMENT_TOKEN_TO_BE_REPLACED