Amazing Grace is a joyful, uplifting film of Aretha Franklin singing gospel music over two nights in a California church in 1972, when she was 29 years old, and at the height of her popularity.  The resulting album Amazing Grace, would become her best-selling album, and is the overall best-selling gospel album of all time. For the album, Franklin added instruments in the studio and overdubbed some of her vocals. This film represents for the first time her original performances at the church.
The film is produced by two-time Oscar winner Sydney Pollack (Out of Africa) and Alan Elliot, and has an interesting history. When the concert was filmed, Pollack somehow failed to properly synchronize the video (captured with multiple cameras) with the sound through the use of a clapperboard, a common film device.  As a result, the film sat on the shelf, until Alan Elliot worked with a special technical team in 2008, who over a three-week period of time worked to get the approximate 20 hours of film properly synced. After that, another ten years of legal issues, Franklin’s resistance to the film being released, her declining health and eventual death in 2018, kept the film from seeing the light of day. We can be thankful that it has finally been released. END_OF_DOCUMENT_TOKEN_TO_BE_REPLACED 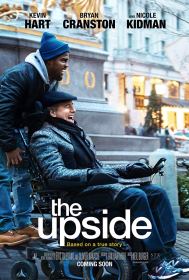 The Upside is an enjoyable film based on a true story about the friendship between two men, one in a wheelchair and the other his caregiver. The film is directed by Neil Burger (Divergent, The Illusionist). The screenplay is written by Jon Hartmere based on the 2011 French film Les Intouchables directed by Eric Toldedano and Olivier Nakache. The film features a strong cast, including an Oscar winner and an Oscar nominee and was shot in Philadelphia.The film is set in New York City. Dell, played by Kevin Hart (Jumanji: Welcome to the Jungle), is an African American, street smart, ex-con. He has been kicked out of his apartment after failing to provide for his ex-girlfriend Latrice, played by Aja Naomi King (The Birth of a Nation), and their teenage son. He has all but given up hope in finding a job. END_OF_DOCUMENT_TOKEN_TO_BE_REPLACED