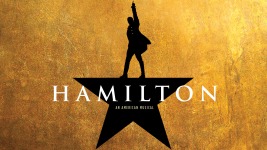 Hamilton, showing exclusively on the Disney+ network (which paid $75 million for the worldwide rights to the film), is a live taping of the award-winning stage production (11 Tony Awards, Grammy Award and Pulitzer Prize for Drama). The musical about the life of Alexander Hamilton, one of our Founding Fathers, was written by Lin-Manuel Miranda, who was inspired by Ron Chernow’s book Alexander Hamilton.
My wife and I saw the musical a few years ago in Chicago. The film version adds to that experience with excellent cinematography and sound quality. The film provides close ups that you couldn’t experience in the theatre, unless you had (very expensive) seats close to the stage.
Two things I highly recommend before watching the film are:

The film was shot over three days in June, 2016 with most of the original cast, including all of its Tony Award winners, at the Richard Rodgers Theatre in New York City before an enthusiastic audience. The 160-minute film was directed by Emmy winner Thomas Kail (Grease Live!), who also directed the stage production. The cast is comprised of mostly Black and Latino performers, playing characters that were White. The sound quality is excellent, thanks to more than 100 microphones that were used to record the on-stage production.
Emmy winner Paul Tazewell (The Wiz Live!) did the costume design and Emmy nominee Declan Quinn (Hysterical Blindness) handled the cinematography. In addition, the choreography in the production was outstanding.
You’ll enjoy the performances of Oscar nominee (for Moana) Lin-Manuel Miranda  (Alexander Hamilton), Daveed Diggs (Thomas Jefferson and Lafayette), Leslie Odom Jr. (Aaron Burr), Jonathan Groff (King George III), Angelica Schuyler (Renee Elise Goldsberry), Eliza Schuyler (Phillipa Soo) and Emmy winner (for Sesame Street) Christopher Jackson (George Washington).
Themes in the film are the founding of America, marriage, adultery, slavery, relationships between Hamilton and Washington, Jefferson, Madison and Burr.
It is surprising that this film is showing on a Disney network, as it is rated PG-13 for some adult themes. Content issues include some adult language including the abuse of God and Jesus’ name, an implied sex scene, adultery, some revealing outfits, deaths by gunshot and a stabbing.
I really enjoyed this film, a live taping of the award-winning musical. However, despite being on Disney+, this is not appropriate for young children.