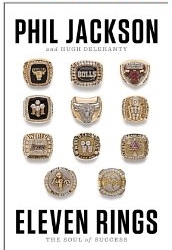 I read this book when it was first published in 2013, and decided to read it again as I watched ESPN’s excellent documentary on Michael Jordan and the Chicago Bulls, The Last Dance. I read the book this time specifically to examine Jackson’s leadership, as he describes the eleven NBA Championships (rings) he won as the Head Coach of the Chicago Bulls and Los Angeles Lakers.
Jackson has been incredibly successful in professional basketball, winning two NBA Championships as a player with the New York Knicks, six as the Head Coach of the Chicago Bulls and five as the Head Coach of the Los Angeles Lakers. The book includes some biographical information and takes us through his career as a player, coach and as the book ends, his at that time new role as the President of the New York Knicks, the one role in his career that he was not successful in. He played his college basketball at the University of North Dakota, where he was coached by future NBA Head Coaches Bill Fitch and Jimmy Rodgers. In a bit of trivia, way back in March, 1967, Jackson and North Dakota played in the NCAA College Division Midwest Regional Tournament at Horton Field House, hosted by Illinois State University, just down the street from where I live in my hometown of Normal, Illinois.
Jackson was raised by parents who were both pastors, but he describes his childhood as a time when he was “force-fed religious dogma by my parents” who were both Pentecostal ministers. As an adult, he began to search for spiritual practices that might work for him. In the book, he refers to his “deep-seated aversion to organized religion”. He speaks extensively in the book about Zen Buddhism, quoting teachers, and discussing aspects of Zen have been critical to him as a leader.
Regarding his leadership, Jackson points to the book Tribal Leadership, by Dave Logan, John King, and Halee Fischer-Wright, which lays out five stages of tribal development, which they formulated after conducting extensive research on small to midsize organizations. In order to shift a culture from one stage to the next, Jackson tells us that you need to find the levers that are appropriate for that particular stage in the group’s development. Throughout the book, Jackson refers to his various teams and the tribal development stages they were in at the time.

Click on ‘Continue reading’ for:
BOOK REVIEWS ~ More of this review and a review of Final Word: Why We Need the Bible by John MacArthur
BOOK NEWS ~ Links to Interesting Articles
BOOK CLUB ~ The Gospel According to Jesus by John MacArthur
I’M CURRENTLY READING….

Jackson doesn’t pretend to be an expert in leadership theory. But what he does know is that “the art of transforming a group of young, ambitious individuals into an integrated championship team is not a mechanistic process. It’s a mysterious juggling act that requires not only a thorough knowledge of the time-honored laws of the game but also an open heart, a clear mind, and a deep curiosity about the ways of the human spirit.” The book is about his journey to try to unravel that mystery.
A key to Jackson’s success with the Bulls and Lakers was the “triangle offense”, which was taught by one of Jackson’s assistant coaches, Tex Winter. Jackson writes that the triangle offense aligned perfectly with the values of selflessness and mindful awareness he had been studying in Zen Buddhism. He tells us that the triangle offense not only required a high level of selflessness, but was also flexible enough to allow players a great deal of individual creativity. He writes that the beauty of the system—and this applies to all kinds of systems, not just the triangle—was that it turned the whole team into a learning organization.
Jackson takes us through his time with the Bulls, beginning as an Assistant Coach under Head Coach Doug Collins. Bulls fans will enjoy reliving Jackson’s years with the Bulls, and reading about Michael Jordan, Scottie Pippen, Dennis Rodman and the supporting players, as well as the team’s General Manager Jerry Krause. Jackson writes that as the team’s fame grew, the rift between he and Krause widened. Eventually, Jackson would be told by Krause that the 97-98 season would be his last, incredibly even if he went 82-0 during the season. Krause was determined to prove that he could rebuild the Bulls without Jackson and Jordan. History shows how unsuccessful he was in doing that. Jackson dubbed the final season “The Last Dance”, as he writes that is what it felt like.
Jackson won five rings over two stints (and nearly a third), as the Head Coach of the Los Angeles Lakers. He writes about leading Kobe Bryant and Shaquille O’Neal, who often clashed, primarily over O’Neal’s perception of Bryant’s selfish play, not playing within the triangle offense.
I enjoyed reading about Jackson’s leadership philosophies, as he led superstars (Jordan, Pippen, Bryan, O’Neal) and difficult personalities such as Dennis Rodman to eleven NBA championships. Note: the book does contain some adult language, usually when Jackson is quoting others.

Respected pastor John MacArthur writes in this short book that without a doubt, the ground Satan most vigorously and continuously attacks these days is the trustworthiness of Scripture—its authority, sufficiency, inerrancy, integrity, and perspicuity. He writes that like Luther and the heroes of the early Reformation, we must meet the enemy head-on and be willing to stand and fight for the truth, especially when others avoid or even abandon truth when it becomes controversial.
He tells us that the war for the truth began in Genesis 3, where we see the first instance of Satan’s strategic assault on God’s Word. Sin arrived when Eve stopped trusting the truthfulness of God’s word and began believing that He was wickedly restrictive. Truth cannot be subjective; there is no such thing as your truth or my truth. Truth is forever fixed. Authentic Christianity has always held that Scripture is absolute, objective truth. The purpose of God’s Word is to deposit life-transforming truth into the mind.
MacArthur writes that perhaps no doctrine has been as consistently assaulted from within the church as the inerrancy of Scripture. God’s Word is under constant assault from critics, cultists, the charismatic movement, the culture, and from the carnal wisdom of the world. Carnal wisdom is whatever Satan attempts to stack against the authority and sufficiency of Scripture: so-called science, human reason, and feeble notions of justice and fairness. He writes that we must uphold the standard of God’s truth, proclaiming its inerrancy, authority, sufficiency, perspicuity, and integrity, and embrace and exalt six truths about the Scripture: its objectivity, rationality, veracity, authority, incompatibility, and integrity.
MacArthur discusses three definitive steps in the biblical pattern of sanctification. He writes that we have to understand what the Bible says and what it means if it is going to produce growth in us. The absence of biblical knowledge retards spiritual thinking and slows spiritual growth. Spiritual growth is the process of growing in Christlikeness—how we think, talk, and act must always be conforming to the Lord’s righteous standard. Sanctification is about being inwardly compelled to obedience. The Word reveals Christ to us, and the Word transforms us into His likeness. God’s people need to submit faithfully to the authority of all Scripture and to the sanctifying work the Spirit accomplishes through it in our lives. It is by seeking the glory of God, obeying the truth of God, and pursuing the will of God that one is sanctified.
MacArthur tells us that today, the church is overrun with false shepherds peddling faulty interpretations of Scripture that are not God’s Word. Much of the chaos and confusion in the church today is the direct result of pastors’ failing to carefully discharge their duty to teach sound doctrine and train people to be discerning, so as to guard the church from error. The church is overrun with “leaders” who have human skills but no passion for biblical scholarship. Tolerance toward people is a good and biblical virtue, but tolerance toward false teaching is sin. A pastor must faithfully feed the Word to the flock the Lord has given him. The state of any church can be known clearly by the content of the preaching, the gravity of the worship, and the doctrinal and God-centered nature of the music.
The author looks at several factors that indicate that we are advancing in our spiritual growth. He writes that if you’re not growing in your love for God, there is good reason to believe that you are treating Scripture superficially. Spiritual growth is the process of growing in Christlikeness—how we think, talk, and act must always be conforming to the Lord’s righteous standard.
Below are some of my favorite quotes from the book:

The Gospel According to Jesus: What is Authentic Faith? by John MacArthur

We are reading through John MacArthur’s classic book The Gospel According to Jesus. What did Jesus mean when He said, “Follow me”?  MacArthur tackled that seemingly simple question and provided the evangelical world with the biblical answer.  For many, the reality of Jesus’ demands has proved thoroughly searching, profoundly disturbing, and uncomfortably invasive; and yet, heeding His words is eternally rewarding. The 20th anniversary edition of the book has revised and expanded the original version to handle contemporary challenges.  The debate over what some have called “lordship salvation” hasn’t ended—every generation must face the demands Christ’s lordship. Will you read along with us?

This week we move into Part Three of the book “Jesus Illustrates His Gospel”, and Chapter 11 “The Soils”. Here are a few takeaways from the chapter: