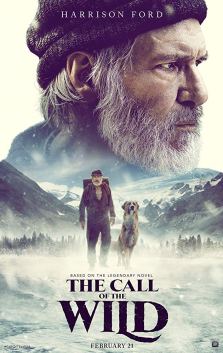 The Call of the Wild is a well-made, family friendly film (for ages 8 and above), is written by Oscar nominee Michael Green (Logan) and based on Jack London’s classic 1903 novel. The film is directed by three-time Oscar nominee Chris Sanders (How to Train Your Dragon, The Croods, Lilo & Stitch), and is the first live action film he has directed.  The film is narrated by Oscar nominee Harrison Ford (Witness, Indiana Jones and Star Wars films), who also plays John Thornton.  The film is set during the 1890’s Klondike Gold Rush.
Buck is a cross between a St. Bernard and a Scotch Shepherd, the same mixed breed as was in London’s book. He lives in a northern California community, where he is the spoiled pet on the farm of Judge Miller, played by three-time Golden Globe nominee Bradley Whitford (The West Wing). But Buck’s life changes when he is captured and taken to the Yukon during the Klondike gold rush, where sled dogs are needed.Buck, played via computer generated imagery (CGI) by Terry Notary (Planet of the Apes, Avengers, Hobbit films), is sold first to a man who abuses him, and then to Perrault, played by Omar Sy, and Francoise, played by Cara Gee, who deliver mail via dogsled. Inspired by visions of a black wolf, Buck slowly shows leadership and replaces the pack leader. Buck enjoys being part of a team. But then the mail service is stopped and the dogs are sold to Hal, played by Dan Stevens (Downton Abbey), and his sister Mercedes, played by Karen Gillan (Guardians of the Galaxy, Jumanji films). Hal is mean to the dogs. John Thornton is able to rescue Buck and nurses the exhausted Buck back to health. Thornton is grief stricken over the loss of his son and drinks to ease his pain. The grief over his son’s death resulted in the end of his marriage. John tells Buck of a great adventure into the wild that John’s late son wanted to take with him. John decides to make that trip with Buck.
On the adventure, Buck begins to spend more and more time with a pack of timber wolves.
The film contains a large amount of computer-generated imagery (CGI), including Buck, a digital scan of Buckley, a dog that the director and his wife adopted from an animal shelter during the production of the film.
Themes in the film are love and loss, self-sacrifice, belonging and home. Content concerns include animal abuse, and sadness (though the film also includes some humor), and some violence that may be too frightening for very young children.
The film features excellent cinematography (shots of Canada and Alaska) by two-time Oscar winner Janusz Kaminski (Saving Private Ryan, Schindler’s List). The musical score by Oscar nominee John Powell (How to Train Your Dragon) adds a lot to the film.
The Call of the Wild is a well-made film based on the classic novel by Jack London. It’s a film that families (children 8 and older) can enjoy together.

3 thoughts on “My Review of THE CALL OF THE WILD”