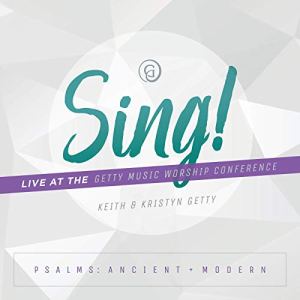 This album was recorded live at the second annual Getty Music Worship Sing!  Conference at the Nashville Music City Center and historic Ryman Auditorium, September 10-12, 2018. I attended this conference, and can attest that the singing of the 7,500 attendees, along with a 300-person choir, was a foretaste of Heaven. Keith Getty and his incredible songwriting partners had written several new songs on the Psalms for the conference, many of which were included on the Getty’s EP The North Coast Sessions, which was released just prior to the conference. Five songs from The North Coast Sessions are included on the new live album. This recording features Keith and Kristyn Getty, their amazing band and several special guests.

Among the many musical highlights from the conference that are included here is Matt Redman leading the attendees in his “10,000 Reasons (Bless the Lord)”, Andrew Peterson singing his incredible “Is He Worthy?” backed by the 300-person Sing! choir, Matt Boswell and Matt Papa singing “His Mercy is More”, and Shane and Shane joining Kristyn Getty on vocals for “The Lord is My Salvation”.  The great Phil Keaggy adds acoustic guitar to “My Dwelling Place (Psalm 91).” Other special guests included on the album are Cindy Morgan and Stuart Townend, a frequent writing partner with Keith Getty, and co-writer of the classic “In Christ Alone”.
The production quality is excellent, especially impressive for a live album. 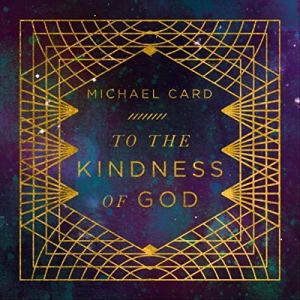 It’s hard for me to put into words what the ministry of Michael Card has meant to my spiritual growth. For 35 years, his music, books, and Biblical Imagination Conferences have had a profound impact on me. The first album of his that I bought was 1984’s Known by the Scars when I was a relatively new believer. Many of his books have also had an accompanying album, as is the case here. The new album is about the wonderful concept of hesed, which Card refers to as an “untranslatable, three-letter, two-syllable Hebrew word”.  He does help us with a working definition of hesed – “when the person from whom I have a right to expect nothing gives me everything”. The album is a companion to his excellent book Inexpressible: Hesed and the Mystery of God’s Lovingkindness (see my review here), and may be his final full-length album. Let’s hope that we continue to be blessed by the biblically based music of Michael Card, in whatever format, for many years to come.
Cards has described the album as a “very acoustic, classical-sounding record” with no drums. There are six new songs, a new live version of a previously released Card song, and three covers. Below are a few comments about each song on the album:
Come as You Are – This beautiful opener is driven by piano, with backing vocals and light percussion added at the chorus, which is from Psalm 100:5:
For the Lord is good and his love is everlasting.
Oh, the Lord is good and his mercy never ending
Won’t you come
A female vocalist joins in at the second verse.
Hymn to the Kindness of God – On this song, Card sings of many attributes of God (beauty, kindness, gentleness, tenderness, endless, graciousness, patience, etc.) over piano and an impressive string arrangement.
The Shelter of the Shadow – This song features strings, and a female vocalist backed by a classical choir. The song is about Exodus 34 and Moses’ encounter with God, which Card has described as the defining moment of hesed in the Hebrew Bible. Moses has asked to see God’s glory. The Lord has responded by revealing the true nature of that glory: compassion, mercy, truth, kindness, hesed. He references Exodus 34:6:
“And he passed in front of Moses, proclaiming, “The Lord, the Lord, the compassionate and gracious God, slow to anger, abounding in love and faithfulness.”
That Kind of Love – This is a cover of Pierce Pettis’ song, a song I wasn’t previously aware of. It’s a beautiful piano driven song with a nice string arrangement. The lyrics fit nicely with the hesed theme. That kind of love can’t be bought, sold or faked. It always gives itself away. May we be remembered by that kind of love.
When Dinah Held My Hand/Jesus on the Mainline – This song refers to a story that Card tells in the book about a time when Dinah demonstrated hesed to him when he visited an African American church. The song is driven by banjo and other string instruments. The song then merges into a Black gospel version of the traditional song “Jesus on the Mainline” driven by piano and female vocals.
Gomer’s Song – This is a new live version of “The Song of Gomer”, originally recorded on Card’s 1992 album The Word: Capturing the Imagination.  It is about the adulteress wife of the prophet Hosea. The song features a nice acoustic guitar solo. Hosea showed hesed to Gomer, who had no right to expect anything.
Simply more than I can see
How he keeps on forgiving me
The wife of adultery
Gomer is my name
This is My Father’s World – This song was written by C. Barny Robertson and Maltbie Babcock. It features acoustic guitar and beautiful strings by Alan Moore, who came out of retirement to do the arrangement. This is a beautiful recording, but I didn’t see the connection to the subject of hesed that the other songs on the album have.
I Will Be Kind – This beautiful song, featuring piano, strings and backing vocals, is about one of the fundamental facets of hesed, reciprocity. In his book, Cards tells us that once a relationship or covenant of hesed is established, there is an unspoken mutuality. The one who was initially shown hesed naturally demonstrates hesed in return. He tells us that reciprocity is an indication that you have internalized the truth of hesed. In light of all He has done for us, what should we do? We will become His hands and feet, forgiving, loving as we have been forgiven, being gracious and kind.
Why Not Change the World – This song aligns with Card’s final challenge to the reader of the book – to take the understanding we have in our heads of hesed and allow the Spirit to move it into our hearts. In the book, he tells us that we must enter into the world of the word hesed and then take that world into our world, back to our families, to our churches and towns—to our enemies.  The upbeat song is driven by piano and light percussion and features a Korean choir singing in their native tongue.
Why not change the world,
why not set it free?
Why not let the change begin with you and me?
We will never make a difference
Till we see a change of heart
Why not change the world, why not make a start?

His Mercy is More by Matt Boswell and Matt Papa

This week’s song of the week is Matt Papa’s wonderful song “His Mercy is More”. The song was recorded at the Sing! Conference in Nashville last September and is included in the live album Sing! Psalms: Ancient + Modern (Live At The Getty Music Worship Conference). Listen to the song here.

Verse 1:
What love could remember, no wrongs we have done
Omniscient, all-knowing, He counts not their sum
Thrown into a sea without bottom or shore
Our sins they are many, His mercy is more

Verse 2:
What patience would wait as we constantly roam
What Father so tender is calling us home
He welcomes the weakest, the vilest, the poor
Our sins they are many, His mercy is more

Verse 3:
What riches of kindness He lavished on us
His blood was the payment His life was the cost
We stood ‘neath a debt we could never afford
Our sins they are many, His mercy is more

3 thoughts on “MUSIC REVIEWS and NEWS”