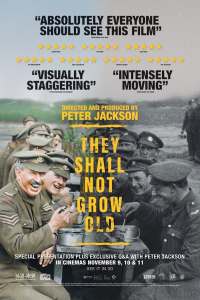 They Shall Not Grow Old is an amazing documentary made to commemorate the 100th anniversary of Armistice Day (November 11, 1918), which ended the fighting in World War I. The film is directed by three-time Oscar winner Peter Jackson (The Lord of the Rings: The Return of the King) who did not take a fee for the making of the film. Jackson dedicated the film to his grandfather who fought, and was injured, in the war.
The theatre presentation of the film begins with Jackson making a few brief comments to the audience, telling them that he will be back after the ending credits to talk about how the film was made. I would highly recommend you stay for that portion of the presentation as it added a lot to the entire experience as he talks about the film’s scope, approach, sound, colorization, music and purpose.
In the film, Jackson focuses on the life of the ordinary British foot soldier. He chose not to use a narrator, as is common for a documentary, but instead to use the actual voices of British soldiers who took part in the war from decades old BBC recordings of war veterans recounting their actual experiences in the trenches on the Western Front.The film begins in black and white, taking us through the recruitment and training of the soldiers. It is stunning to see how young the enthusiastic boys were, many as young as 15 years old (19 was the minimum age, but a lot of them fibbed in order to enlist), who were anxious to fight the Germans. The film is then colorized when the men arrive on the Western Front, staying that way until the war ends, when it shifts back to black and white.
Jackson uses video that was filmed on location on the Western Front from 1914-1918. We are able to hear the sounds from the period through recreated sound effects (canon fire, etc.). Jackson used professional lip readers to determine what the men were saying in the film, and then used British actors to recreate it.  For the most part however, the film features the voices of the men who fought in the war, their specific names listed in the ending credits.
Jackson and his team had access to more than 600 hours of interviews with in excess of 200 soldiers, and about 100 hours of original footage. Much of the footage had never been seen, having sat in the vaults of London’s Imperial War Museum for many years. The team used computer restoration technology to improve the clarity of the film, adjust its speed and colorize it. Jackson explains the specifics after the ending credits.
There was no film available of the intense hand to hand fighting between the British and Germans. Jackson chose to use pencil sketches of the combat from the British magazine The War Illustrated for this part of the film.
The film shows that the men did not celebrate when the war ended, and that they were treated poorly when they returned home, not able to find jobs.
Content concerns include gruesome war images, including several shots of dead soldiers and horses in various stages of decomposition. It shows the terrible conditions the men lived in within the trenches (lice, rats, etc.) and clearly shows the horror of one of the deadliest conflicts in history. There is rear male nudity shown, but not in a sexual sense. Themes in the film include patriotism, war, friendship and death.  This film made you feel like you were in the trenches alongside these soldiers.
They Shall Not Grow Old is an incredible piece of filmmaking from Oscar winner Peter Jackson, for whom the making of this film was very personal to him and his wife. He also states in the helpful segment after the ending credits that it is likely most of us had a relative who fought in the war, and he doesn’t want us to forget them.