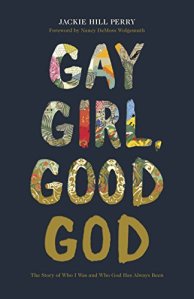 Jackie Hill Perry is a 29-year-old writer, speaker and artist, who was born in St. Louis. She writes that she has written this book out of love for what a good God has done for her – loving her and giving her new life and a new heart. She tells us that what God has done to her soul is worth telling. It is to invite us into her worship.
The book is broken into three parts.
Part 1: Who I Was
The author tells us that she was attracted to girls before she knew how to spell her name. After discussing what took place in her second-grade classroom, she writes that in 2006 she was asked by a girl at a high school dance if she wanted to be her girlfriend. She said “no” at the time, but really wanted to. But when she thought of the girl she would think of spending eternity in hell. Her heart was saying “yes” but her conscience was saying “no”. Eventually she gave in, however. Satan told her to do what felt good. She trusted herself more than she trusted God. Sin was better than submission.
The author’s mother and her father, an employee at her mother’s restaurant met at an East St. Louis club in 1988. This would eventually lead to a pregnancy. The author’s mother considered aborting the child. The relationship between Jackie’s mother and father didn’t work out, and Jackie grew up without a father at home. He rarely visited and she was convinced that he didn’t love her. Jackie writes of him dying unexpectedly at a relatively young age.
Jackie was sexually abused by a teen-age family member in a dark basement. As she grew up, her experiences with men in her life were an absentee father and a sexually abusive relative.
As a lesbian, Jackie was manly, and her girlfriend wanted her to play the role of the stud in their relationship. She would have at least one other girlfriend.
At that time, Jackie was an enemy of God. But God was using her conscience. He was, as she called it, ‘hunting her’. In addition, a family member prayed for her. She realized that she would have to choose between God and her girlfriend. She writes about being saved in her room.

Click on ‘Continue reading’ for more of this book review and:
BOOK REVIEWS ~ How Should I Think about Money? by R.C. Sproul
Morning and Evening: A New Edition of the Classic Devotional by Charles H. Spurgeon
BOOK NEWS ~ Links to Interesting Articles and Free Audiobook!
BOOK CLUB ~ How the Nations Rage: Rethinking Faith and Politics in a Divided Age by Jonathan Leeman
I’M CURRENTLY READING….

Part 2: Who I Became
Jackie writes that she faced a temptation with a beautiful girl the very next day after she was saved. Fortunately, she was sustained by God.
Jackie writes that she wished that she had been told more about the beauty of God rather than the horrors of hell, a good reminder for all of us. She writes of being discipled by a woman in Los Angeles, and moving there from St. Louis. She writes of missing her girlfriend, but God told her that His word was true, even if it contradicted how she felt. She needed to fight sin with the Gospel. Ultimately, she loved God more than the Gay community.
She writes of learning what biblical womanhood was, and starting to dress in a feminine manner. Jackie met future husband Preston at a poet event in Los Angeles. She writes of having hurt him, but he still pursued her.
Part 3: SSA and….
Approximately the last quarter of the book is comprised of chapters that serve as helpful resources for others dealing with Same Sex Attraction (SSA). Jackie writes that our identity is only in Christ, not our temptations, but what Christ has done for us.
• SSA and Identity:
Jackie writes that how you identify yourself will shape how you navigate life. She reviews four categories that will help SSA Christians in their sanctification:
1. Identity of Sin. Sin is not beautiful.
2. Identity of a Saint. You are not your temptations.
3. Identity of the Church. You are not alone.
4. Identity of God. God is better than you can imagine.
• SSA and Endurance
Jackie addresses the enduring and sometimes difficult struggle that SSA Christians will face against temptation.
• SSA and the Heterosexual Gospel (which is not a gospel at all).
1. We are more than our sexuality. We were not ultimately made for sex. We were made for God and his glory alone.
2. Marriage is not the pinnacle of the Christian faith.
3. Singleness is not a curse.
4. Evangelism is about God.
Jackie uses scripture effectively throughout the book. I listened to the audiobook version of the book, which was well-read by the author. Highly recommended.

In this booklet in his helpful Crucial Questions series, the late Dr. R.C. Sproul states that how we use our resources is the subject of economics, and in a biblical sense it is the chief concern of stewardship. He tells us that the concern for stewardship is rooted in creation. Stewardship is about exercising our God-given dominion over His creation, reflecting the image of our creator God in His care, responsibility, maintenance, protection, and beautification of His creation.
He writes that the basic theme of stewardship is that we are responsible before God for how we use the goods, services, and resources that are at our disposal. This means that a Christian steward is to be careful not to be wasteful with them.
He writes that while money itself is neutral, our attitude toward it can be good or evil. He writes of misunderstandings that have been perpetuated in the Christian community. One myth is that being wealthy is inherently sinful. Another myth is that there is some kind of inherent righteousness connected with being poor.
He tells us that one of the most important things to consider is how we allocate the resources that God has given to us. It’s important that we make wise decisions about how we’re going to spend our money.
He tells us that perhaps one of our greatest problems is wasting money. How we use our money is a matter of concern to God, because we are to be good stewards with what He has entrusted to us.
It is our duty as Christians to provide for our families, and that provision involves a wise use of whatever resources we have at our disposal. He encourages us, that as much as is humanly possible, we should make every expenditure an investment. And, the most important investment we can ever make is in the kingdom of God. 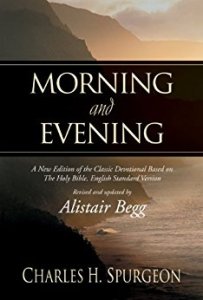 Morning and Evening: A New Edition of the Classic Devotional Based on The Holy Bible, English Standard Version by Charles H. Spurgeon. Revised and Updated by Alistair Begg
****

Charles Spurgeon was one of England’s most popular preachers during the second half of the 19th century. He published many books including a morning devotional in 1865 called Morning by Morning and an evening devotional in 1868 called Evening by Evening. Since that time, many Christians have begun and ended their days with these devotional classics. Respected pastor and author Alistair Begg tells us that these writings are unrivaled as an example of deep theological insight and warm pastoral concern.
In revising and updating Spurgeon’s classic Morning and Evening devotional readings, Begg has tried to make them more readable without spoiling the splendor of Spurgeon’s language. Many of the changes are minor and will go largely undetected by the reader. In a few instances, because of the differences between the King James Version and the English Standard Version of the Bible, Begg was forced to take more liberty. Throughout, his goal was to fashion the material in a way in which it will be accessible to a far wider audience than it had been before. His prayer is that another generation will emerge thankful to God for the work of Spurgeon.
Morning and Evening provides two devotionals a day – one for the morning and one for the evening. A Scripture verse opens each reading. A Scripture Index is included in the back of the volume.
I had this book on my desk in my office at work for daily readings for years. This volume is a wonderful companion to the new CSB Spurgeon Study Bible, which Begg served as the editor.

How the Nations Rage: Rethinking Faith and Politics in a Divided Age by Jonathan Leeman.  Thomas Nelson, 272 pages. 2018

This summer we are reading through an important and timely new book from Jonathan Leeman, editorial director at the ministry 9Marks, which helps Christians discover the most effective path forward amid battling worldviews: living as citizens of another kingdom and offering the world a totally new kind of politics.

This week we look at Chapter 3: Heart: Not Self-Exalting, But Born Again and Justified

3 thoughts on “BOOK REVIEWS and NEWS”