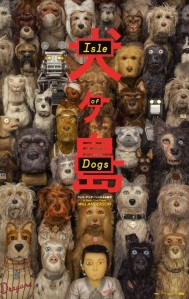 Isle of Dogs is a creative and entertaining stop motion animated film about a 12-year-old boy who searches for his loyal dog who has been banished to Trash Island as a result of the dog flu. The film is well made and includes some positive themes.
The film is directed by six-time Oscar nominee Wes Anderson (The Grand Budapest Hotel, Moonrise Kingdom, Fantastic Mr. Fox, The Royal Tenenbaums). It is written by Anderson, Oscar nominee Roman Coppola (Moonrise Kingdom), Jason Schwartzman (The Grand Budapest Hotel, Moonrise Kingdom), and Kunichi Nomura (The Grand Budapest Hotel, Lost in Translation). The strong cast includes four Oscar winners (F. Murray Abraham, Tilda Swinton, Fisher Stevens and Frances McDormand) and seven Oscar nominees (Edward Norton, Bill Murray, Jeff Goldblum, Harvey Keitel, Bryan Cranston, Greta Gerwig and Bob Balaban). The musical score is by two-time Oscar winner Alexandre Desplat (The Shape of Water, The Grand Budapest Hotel). The cinematography is by Tristan Oliver (Loving Vincent, Fantastic Mr. Fox).
The film is set twenty years in the future in Megasaki City, Japan. The city has a dog overcrowding problem plus the dogs all have snout fever and the dog flu. To protect the people of Megasaki City, Mayor Kobayashi, voiced by Kunichi Nomura, orders that all dogs are to be sent to Trash Island, a depressing and deserted island just off the coast of Japan where the city’s trash is sent. The dogs will have to fend for themselves on the island.
Mayor Kobayashi decides that the first of the dogs to be sent to Trash Island will be Spots, voiced by six-time Golden Globe nominee Liev Schreiber (Ray Donovan).  Spots is the loyal guard dog for the mayor’s 12-year-old ward and nephew Atari, voiced by Koyu Rankin, whose parents were killed in a tragic accident.
Atari secretly decides to pursue Spots. They had each worn an earpiece which had served as a tracking device. Atari plans to use the tracking device to help him find Spots on Trash Island. Atari steals a small plane that he flies to the island where he meets a group of alpha dogs. They include a long-time stray and pack leader, Chief, voiced by Oscar nominee Bryan Cranston (Trumbo), former sports mascot Boss, voiced by Oscar nominee Bill Murray (Lost in Translation), King, a former dog food commercial star, voiced by Oscar nominee Bob Balaban (Gosford Park), Rex, voiced by three-time Oscar nominee Edward Norton (Birdman) and the island gossip Duke, voiced by Oscar nominee Jeff Goldblum (Little Surprises). The alpha dogs eventually agree to help Atari find Spots.
Four-time Golden Globe nominee Scarlett Johansson (Lost in Translation) portrays Nutmeg, a purebred and well-groomed dog who used to do tricks and demonstrates some of them for Chief.  Mayor Kobayashi sends his people to Trash Island to bring Atari back home.
Scientists back in Megasaki, led by Oscar nominee Ken Watanabe (The Last Samurai) and his assistant, voiced by Yoko Ono, work on a dog flu vaccine. Tracy, voiced by Greta Gerwig, is a high school exchange student from Cincinnati, who is investigating the ouster of dogs for the Manifesto, the school newspaper.
The film is told with a prologue, four chapters and a flashback. The film was narrated by Golden Globe nominee Courtney B. Vance (American Crime Story). It includes some violence, which is usually obscured by dust clouds, which may remind you of the old Road Runner cartoons.
Isle of Dogs is a very creative animated film that contains witty humor and some positive messages; it is unlike any other animated movie you’ve seen.   Themes include friendship, kindness, evil, violence, repentance, sacrifice and reconciliation.
Content concerns include a small amount of adult language and brief nudity, not intended in a sexual nature. The film could easily have been rated PG, but I would hesitate to call it a children’s film as it is often dark.  But there’s enough humor written into the script (and the scene backdrops) to make it enjoyable.  You’ll love every time the dogs look into the camera.
It was also interesting to read a Japanese person’s enlightening view of the film in The New Yorker.