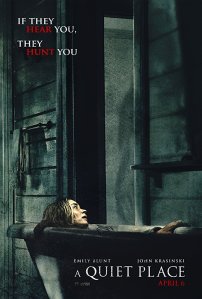 A Quiet Place is a well-made terrifying and intense psychological thriller/horror film about a family trying to survive alien killing creatures that hunt by sound. The film is directed by three-time Emmy nominee John Krasinski in just the second film he has directed (The Hollars). The film is written by Krasinski and Bryan Woods and Scott Beck, the latter two also wrote 2015’s Nightlight. The musical score is by two-time Oscar nominee Marco Beltrami (The Hurt Locker; 3:10 to Yuma).  The film was shot in New York and has a small, but solid cast.
The film is about the Abbott family trying to survive in a post-apocalyptic world. Krasinski (The Office), stars as father/husband Lee and real-life wife Golden Globe winner Emily Blunt (Gideon’s Daughter), stars as mother/wife Evelyn. They speak sign language to their children, son Marcus, played by Noah Jupe (Suburbicon), and their deaf daughter Regan, played by the real-life deaf actress Millicent Simmonds (Wonderstruck). Lee and Evelyn urge their children to be as quiet as possible so as not to attract the creatures.
We are told at the beginning of the film that it is “Day 89”. The world has been taken over by creatures who hunt and kill based on sound. We aren’t given the back story on what happened or who these creatures are. The family lives in a sound-proofed abandoned farmhouse. They use paths of sand to deaden the sound and also mark the steps in the house that won’t creak.
As time moves forward, we see that Evelyn is pregnant. We have to wonder how she will be able to deliver a baby without making a sound? What about the baby crying?
While the film focuses on the family trying to survive and Lee and Evelyn trying to keep their children safe, it also shows us the family trying to live as normal a life a possible, given the circumstances. We also are given insights into their relationships, including Lee’s strained relationship with daughter Regan, who believes her father hates her because of something that happens early in the film.
There is minimal audible dialogue in this film, with much of the communication being via sign language. The film is efficient, running just 90 minutes, and always keeping the viewer on edge.
Content issues include terrifying violence. There are no sexuality or language issues.   Themes include sacrificial love, family and survival.
A Quiet Place is a well-made and directed terrifying story of survival. The music helps to build the suspense throughout the film. It is well-made and acted but is certainly not for the faint of heart.