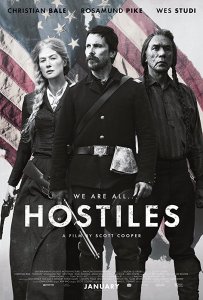 Hostiles is a well-acted and beautifully filmed western about two enemies who unexpectedly find themselves on a long, dangerous and uncomfortable journey. Unfortunately, the film is painfully slow, overly long at 134 minutes, and features politically correct messages.
The film is directed by Scott Cooper (Crazy Heart, Black Mass, Out of the Furnace). Cooper wrote the screenplay based on a manuscript by the late Oscar winner Donald E. Stewart (Missing). The landscapes of the west are beautifully captured in the cinematography of Masanobu Takayanagi. The film features a powerful musical score from Emmy nominee Max Richter (Taboo).
The film is set in 1892. United States Cavalry Captain Joseph J. Blocker, played by Oscar winner Christian Bale (The Fighter) has been fighting Comanche, Apache and Cheyenne natives for more than twenty years, and he has a deep hatred for them. But then he is ordered to escort one of his most despised enemies, Cheyenne Chief Yellow Hawk, played by Wes Studi (The Last of the Mohicans), and his family from New Mexico back to the Chief’s home territory, Valley of the Bears, in Montana. Chief Yellow Hawk is dying of cancer. The President of the United States has determined that he is to return to Montana to be buried, and then his family will be released to a nearby Indian reservation. Blocker initially refuses, but at the threat of a court martial and the loss of his Army pension, he reluctantly agrees.
Blocker sets off on the long journey with Chief Yellow Hawk and his family, as well as his longtime friends Master Sgt. Thomas Metz, played by Rory Cochrane (Argo), Corporal Henry Woodson, played by Jonathan Majors, and a few others. They soon come upon a farmhouse in New Mexico that has been raided by the Comanche, which we had seen in the film’s opening scene. The only survivor is mother/wife Rosalie Quaid, played by Oscar nominee Rosamund Pike (Gone Girl). Rosalie joins the group on their journey. On the way, they are attacked numerous times by various enemies.
The film shows how Captain Blocker, Chief Yellow Hawk and the others have to work together to fend off the attacks. Along the way, the group receives a new assignment to pick up Sgt. Charles Wills, played by Ben Foster (Hell or High Water), and transport him to another town where he will be tried for murder.
Content concerns include extreme violence and bloodshed, and some adult language, including a few abuses of God’s and Jesus’ names. Themes include hatred, reconciliation, faith and injustice. Three of the characters in the film are shown to be Christians.
Bale, one of today’s best actors, is excellent as Blocker. Studi solidly portrays the ailing Chief Yellow Hawk and Rosamund Pike is superb as the surviving widow.
Hostiles is a well-acted and beautifully filmed movie that moves along at a painfully slow pace (think of the movie Nebraska). It serves as a “message movie” about how the Native Americans were mistreated.