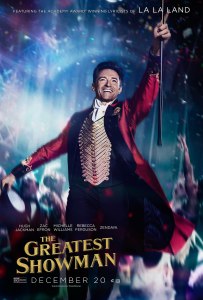 The Greatest Showman is a very entertaining and well-made musical inspired by the life of P.T. Barnum, featuring excellent new songs by the Oscar winning lyricists from La La Land. The film, which has received three Golden Globe nominations, is directed by Michael Gracey in his directorial debut, and is written by Emmy winner Jenny Bicks (Sex and the City) and Oscar winner Bill Condon (Gods and Monsters). The musical score is by Oscar nominee John Debney (The Passion of the Christ) and Joseph Trapanese. The film includes eleven new songs written by Oscar (La La Land) and Tony (Dear Evan Hansen) Award winners Benj Pasek and Justin Paul. Cinematography is by Seamus McGarvey (Anna Karenina, Atonement).
Oscar nominee Hugh Jackman (Les Miserables) portrays the legendary 19th century promoter Phineas Taylor P.T. Barnum. Jackman read approximately three dozen books about Barnum to prepare for the role.
The film opens with the title song performed in a big song and dance production number. Jackman, with his Broadway experience, is excellent in his performance as Barnum.
We then see a flashback in which Barnum, a young and impoverished tailor’s son, played by Ellis Rubin, first meets the privileged but sweet Charity, played by Skylar Dunn. We see them fall in love, but Charity’s father tells P.T. to stay away from his daughter, who is then sent away to a boarding school. But we see them stay in touch through letters. The film moves forward a dozen or so years, with Jackman portraying Barnum, and four-time Oscar nominee Michelle Williams (Manchester by the Sea), portraying his now wife Charity.
Barnum longs to make something of himself. He and Charity have dreams that they sing about in “A Million Dreams”. As time goes on, the family grows with two daughters but they struggle financially. When things are really desperate, in 1841 Barnum comes up with an idea for a new kind of entertainment. He decides to open a museum/theatre in the heart of New York City. At first, he doesn’t have any success. Then his daughters suggest that he feature real people, not stuffed animals and displays, so he decides to look for people with special talents and also some with physical abnormalities (bearded lady, Siamese twins, dwarf, giant, etc.). This leads to what we now know as the circus. Although he now has success, Barnum and his circus face a significant amount of protests, some of them violent.
Barnum convinces the socialite playwright Phillip Carlyle, played by Zac Efron (High School Musical) to become his business partner; together they sing “The Other Side”. But this is much to the chagrin of Phillip’s parents. They are even more displeased when Phillip falls in love with Anne Wheeler, played by Zendaya (Spider-Man: Homecoming), a beautiful black trapeze artist in the show. Zendaya does all of her own trapeze stunts in the film. She and Phillip perform “Rewrite the Stars” about their love that has so many obstacles.
Barnum achieves great success with the circus, but he longs for greater social acceptance. He is never satisfied, though Charity loves and accepts him just as he is, and tells him that she has everything she needs in their life. To try to gain more acceptance in higher social circles, Barnum brings opera singer Jenny Lind, “The Swedish Nightingale”, to the United States for a very successful tour. He wants her to be known as the best singer in the world.  Lind is played by Golden Globe nominee Rebecca Ferguson (The White Queen), but whose singing in the film is actually performed by Loren Allred.  She offers a powerful performance of “Never Enough”. But as Barnum becomes charmed with Jenny and fame, he abandons the circus, leaving it to Carlyle to run.
I’m not usually a fan of movie musicals. But I really enjoyed The Greatest Showman. It is a film that the entire family can enjoy this holiday season. You’re most likely going to want to check out the movie soundtrack after seeing this film. Jackman excels in his role as P.T. Barnum, as someone with great dreams and imagination. This has been a dream project for Jackman since 2009, and seems to be a role that he was born to play. Efron also delivers a strong performance as Phillip Carlyle. Tony nominee Lettie Lutz shines as the bearded lady, particularly as she performs the song “This is Me”. Williams, one of today’s best actresses, is strong in a smaller role. The film features excellent dance choreography by Ashley Wallen. I also appreciated the costumes and production design in this film. Themes include classism, friendship and treating others who are different from us with kindness and dignity.
Note: Ironically, on May 21, 2017, the Ringling Brothers and Barnum & Bailey Circus, founded by P.T. Barnum closed down operations after 146 years. The circus had come under attack for exploitation and animal abuse, and was suffering from declining attendance.