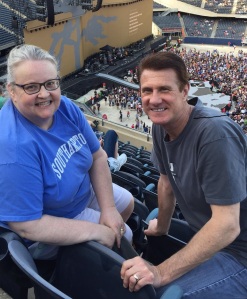 Last Friday, U2, my favorite band, marked the 30th anniversary of their 5th studio album, 1987’s The Joshua Tree, with the release of a reissue, available in several formats. I picked up the digital version of the Super Deluxe edition, containing 49 tracks. Incredibly, The Joshua Tree was listed as the top album of 1987 by two publications as diverse as CCM (Contemporary Christian Music) magazine, and Rolling Stone. Rolling Stone ranked it #27 on their 500 Greatest Albums of All Time list.
The following evening on Saturday, June 3, we attended The Joshua Tree 30th Anniversary Tour, my 8th U2 concert; a sold-out show in Chicago at Soldier Field along Lake Michigan with 60,000 of our closest friends. The average age of the crowd was about 45.  My nephew saw the Houston show on an earlier tour stop and called it, “a religious experience”. U2 has always been so much more than just a band. After all, it was how U2 brought their faith to their music that attracted me to them in the first place. And of course the band, particularly front man Bono, is very active and outspoken on social and political issues.
My love affair with the band began when as a new believer, I bought their 1983 War album, featuring songs such as “New Year’s Day”, “Sunday Bloody Sunday” and “40”, a musical version of Psalm 40. The first time I saw U2 in concert was on their 1992 Zoo TV Tour at the then World Music Theatre in Tinley Park, Illinois. Fast forward 25 years on a beautiful warm June evening in downtown Chicago, the band played The Joshua Tree in its entirety, bookended by some of the most beloved songs, for a total set of 21 songs. 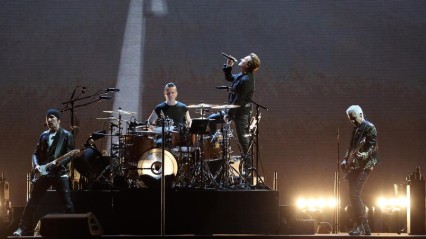 Photo courtesy of the Chicago Tribune

There were many highlights for me, beginning with Larry Mullen Jr. pounding out the first beats to the opening song “Sunday Bloody Sunday” on a small stage at the end of a runway built in the shape of a Joshua tree. Watch them perform the song here.  After the opening set, they moved to the main stage to perform The Joshua Tree album in song sequence order, beginning with “Where The Streets Have No Name”. Watch them perform the song here.  Throughout the concert, video images would be projected on the large screen behind the band, with the band occasionally portrayed on the screen as well. I was surprised that, given the large stadium that the concert was being held in, the band didn’t provide constant video of the band.
After completing The Joshua Tree, the band came back for a six-song encore. Here is the complete setlist. My two favorite songs were “Elevation” and the closing “I Will Follow”.
The band is still going strong more than 37 years since their 1980 album Boy. Incredibly, they have had no band member changes in all that time. Bono is still an incredible performer, on vocals, harmonica and band spokesman, at age 57, and he is backed by perhaps the world’s tightest band, with Edge on guitar and keyboards, Adam Clayton on bass and Larry Mullen on drums.
Throughout the evening Bono, sensing the divide in our country, tried to bring people together, saying it didn’t matter who you voted for, all were welcome at the show. The band took a not so funny shot at President Trump, using what looked like an old western film. After all, it was U2, who after completing their Songs of Experience album, said in January that they were delaying it and reconsidering it in light of Trump’s election.
During the encore, Bono used the song “Miss Sarajevo” to highlight the Syrian refugee crisis and dedicated “Ultraviolet (Light My Way)” to women, with images of many women portrayed on the large screen behind the main stage. Why Angela Davis was among those women I can’t tell you. During this time Bono asked pastors not to be judgmental, perhaps due to his open support of two women he recognized that had just gotten married. It was about that time that I heard someone say, “Just shut up and sing Bono”. But that’s just what you get from Bono. He’s not just a rock star, but an activist. You may not agree with all of his views, and I don’t, but that’s who he is, love him or not.
This wasn’t the best of the eight U2 shows I’ve seen, and it wasn’t the worst. After a very strong start, the show lost some momentum during the performance of “side two” of The Joshua Tree, and in my opinion when Bono “got political”. But it was still an excellent concert. And a nice unexpected addition to the evening was seeing a long fireworks show from nearby Navy Pier near the end of U2’s main set.
I’ve read Greg Kot’s music reviews in the Chicago Tribune for many years. Check out his review of the concert.
The show was opened by the Lumineers, who came on stage more than a half an hour late. I wasn’t familiar with their music, which reminded me a bit of NEEDTOBREATHE, but I enjoyed their set, especially their more upbeat songs. My favorites were “Ho Hey” and “Stubborn Love”. Here is their setlist. 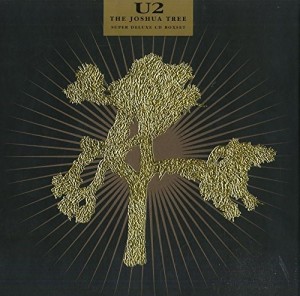 For U2 fans who already have the 2007 remastered Deluxe edition of The Joshua Tree (which I do), purchasing the 2017 Super Deluxe edition will present a decision. Knowing that we would be going to the concert the following day, I decided to purchase it.
The Super Deluxe edition contains the original 11-song 1987 album, outtakes and B-sides, using the same versions from the 2007 Deluxe edition. Of the 49 tracks on the Super Deluxe edition, the only thing that will be “new” for those who have the 2007 Deluxe edition will be an excellent 17-song 1987 concert recorded at Madison Square Garden, six new remixes and two previously unreleased songs – Steve Lillywhite’s alternate version of “I Still Haven’t Found What I’m Looking For” and Brian Eno’s 2017 “One Tree Hill Reprise”. The other 24 tracks have been previously available.
Now, I’m not a huge fan of remixes, or live albums for that matter. To me they are kind of like seeing a movie in 3D; usually not worth the cost. The six songs here are new mixes by producers familiar to U2 fans, such as Daniel Lanois, Steve Lillywhite and Flood. One remix that really stood out for me was Lillywhite’s “Red Hill Mining Town”, which I thought was outstanding in how it effectively brings horns into the mix. The band used that version in their June 3 concert in Chicago.
Picking up The Joshua Tree in one of these available formats and catching them on this tour is a great way to celebrate one of the greatest rock bands and their timeless album.