I was excited to read this new biography of J.C. Ryle, a respected 1800’s theologian/author, published on the 200th anniversary of his birth by Iain Murray, an author who I always enjoy reading. Ryle was born into a family that were leaders in the emerging new merchant class in Macclesfield, England, his grandfather having built a prosperous silk mill, and upon his death left an immense fortune to his son, John, J.C. Ryle’s father. John would become one of the best-known figures in the county, being elected to Parliament.
J.C. was raised in the greatest comfort and luxury, and had everything that money could buy, but his father took little notice of his children.  He would be sent to a private preparatory school for three and a half years, twenty miles from home.  He would next go to Eton College, which was twenty-one miles west of London, where he spent nearly seven years and begin his love of the sport of cricket. In 1834 he entered Christ Church, Oxford, where he spent three years. During his first 18 years he writes of being barely exposed to biblical Christianity in his home.
He did not know the exact date of his conversion, but his turning point took place in 1834. He would return from Oxford a different man.
He was attracted to the legal profession in London, where he stayed for just six months due to poor health.  His father’s bank would be ruined and all of his wealth would be lost – his properties, bank, and silk mill. J.C. writes of his life being turned upside down and thrown into confusion, stating had he not been a Christian at this time, he may have committed suicide.
He became a clergyman because that would bring him some income. At Exbury, he would visit each home in his parish at least once a month, but stated that he didn’t really learn how to preach until he was 50.
Resigning due to poor health, he would be offered the rectory of St Thomas, Winchester, serving some 3,000 people in 1843, where he would stay for only five months.
He would meet and marry Matilda in 1845. She would die just three years later of lung disease. He would marry Jessy in 1850, who would become ill six months into the marriage, dying just ten years into the marriage. He would again become a widower with five children.  He then married Henrietta in 1861, and they would enjoy long years of happiness together before her death in 1889.
Of the significance of Ryle’s writing (tracts, addresses, books), Murray writes that they must be appreciated in their wider historical context. He states that at the beginning of the nineteenth century there were few popular writers in the Church of England.  Most of his books came about in the same way: Holiness in 1877, Old Paths in 1878, Practical Religion in 1879, Coming Events and Present Duties in 1879. All brought together material previously published as separate tracts. By 1888 it is said that between 200 and 300 tracts of various lengths had been published, with over 12 million issued. From his first tract at Helmingham in 1844, the primary intention was evangelistic and pastoral. He produced a large amount of writing in his difficult years at Helmingham. Murray writes that he could produce so much of enduring value, and that in the midst of many trials, is indication enough that he was himself being fed from rich sources. Ryle would become the vicar at Stradbroke in 1861.
In 1869, he would become a rural dean of Hoxne which involved a measure of oversight for twenty-five other parishes, and in February 1872 he was made an honorary canon of Norwich.
At age 63. Ryle would become the Bishop of Liverpool. Murray writes of challenges that Ryle faced in his leadership. For the sake of unity and better relationships with other Churchman, he urged toleration over what was not fundamental. He encouraged attendance at mixed gatherings such as Convocations and Church Congresses.
One of the greatest disappointments in his life, would be his son Herbert aligning with the opposition theologically. His father saw the strength and unity of the Church in a return to definite evangelical doctrines. Herbert saw the Church attaining peace and unity by the allowance of a broad doctrinal liberty. Murray writes that despite their differences, the bond between father and son had not failed, and that they would remain close.
Ryle was to express regret that he had not come to Liverpool as a younger man when he would have been able to do more. By the beginning of 1899 Ryle’s health was in evident decline. On January 8, 1899, he preached at St. Nathaniel’s on John 17:15. It would be his last time in that pulpit. Passing his 84th birthday on May 10, he would die on June 10.
The book includes appendices on extracts from Ryle and on son Herbert.

In this short book, respected pastor and author John MacArthur aims to get beyond the mere facts of who God is and help the reader to develop an understanding of His character. He wants us to not just know about God, but to know Him. Among the many important topics he briefly covers in this book include election, God’s sovereignty, salvation (justification, sanctification and glorification), imputation, substitution, evil and God’s holiness.
He writes that the truth about election is essential to understanding who God is, His plan of redemption, and His design for the church. We also must hold the doctrine of election with great humility. The ultimate end of election, the ultimate purpose behind God’s grace poured out on us, is the eternal glorification of the Son.
A particularly helpful section is when he looks at God’s sovereignty and human will, an issue that many struggle to understand. He writes that while some see an insurmountable contradiction between divine sovereignty and human responsibility, God’s sovereignty does not nullify our own personal responsibility for the sinful things we do. He writes that the Bible is not concerned with reconciling divine judgment with any human assumptions about justice or fairness. Scripture simply explains what God did, and we are to understand that it was just and fair because He did it. He tells us that God’s sovereignty is a truth that should provoke wonder and worship.
He tells us that salvation is God’s work, but it is nevertheless our duty to believe, and God will hold those who refuse Him responsible for their unbelief. And while the Lord knows whom He chose in eternity past, we do not have insight into His electing work. As a result, we must fervently pursue every sinner while there is still time to repent.
He states that salvation is primarily for the honor of the Son, not the honor of the sinner, and that the purpose of the Father’s love gift is not to save us so we can have a happy life; it is to save us so that we can spend eternity praising the Son. In God’s perfect plan, He sovereignly draws us to Christ. On our own, we would never choose to believe in Christ. But in God’s sovereignty, those He draws will, without fail, believe. He tells us that the Lord’s gracious choice of certain people unto eternal life is just that, His choice. It’s not based on human merit.  God has graciously, lovingly extended the offer of the gospel to all mankind. But that offer won’t last forever.
He writes that if we understand the true nature of sin, righteousness, and judgment, we should realize that it’s no mystery at all why God condemns sinners. The real mystery is why He saves anyone at all.
He writes that the gospel proclaims the way to forgiveness, redemption, a right standing with God, and the gift of eternal life. It is not a guarantee that earthly suffering will be banished from our experience, nor does it promise immediate or automatic healing from every physical affliction.
Don’t underestimate this book due to its small size. There is much gold included. 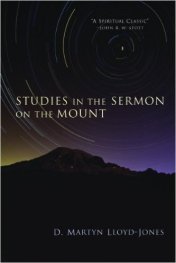 Studies in the Sermon on the Mount BOOK CLUB

Studies in the Sermon on the Mount by Dr. Martyn Lloyd-Jones

This book made a significant impact on my wife Tammy when she read and discussed it with friends thirty years ago. When I picked up my diploma the day after graduation ceremonies from Covenant Seminary last year I was given a copy of this book. After enjoying Lloyd-Jones book Spiritual Depression (and the sermons the book was taken from), I couldn’t wait to read this book, which is the printed form of sermons preached for the most part on successive Sunday mornings at Westminster Chapel in London.

This week we look at Chapter 14: Worry: Its Cause and Cure: