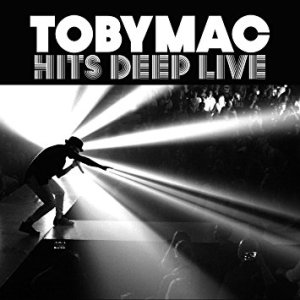 Eight years after his Grammy winning live album Alive and Transported, Toby Mac returns with another high energy live album Hits Deep Live recorded at the CenturyLink Center in Bossier City, Louisiana. The 16 songs (64 minutes of music), are pulled primarily from his last two albums 2015’s This is Not a Test (9 songs), and 2012’s Eye on It (4 songs). There are also 2 songs from 2010’s Tonight and one song from 2007’s Portable Sounds.

Having seen Toby play many of these songs live, I’m convinced that his music is best experienced live in concert, and the sound quality here is excellent. He is backed by his Diverse City band and joined by several special guests – Colton Dixon, Britt Nicole and Hollyn. For “Love Feels Like”, former D.C. Talk bandmates Michael Tait and Kevin Max are not present, but their voices from the recording of the song are included, giving the feel of a live reunion.

With Hits Deep Live you get excellent songs performed well in a live setting, which adds to the energy. It’s hard to pick a favorite, but I always thought that “Feel It” would sound great live and it doesn’t disappoint here.

This will be appreciated by Toby Mac fans and would also serve as a good introduction to the artist for those wanting to check out his music.

This 10-song mixtape is the multi-gifted (musician, author, pastor) Trip Lee’s follow-up to 2014’s excellent Rise, and it gives us some new music until his next full-length studio album, which he has said will be coming soon. The mixtape features excellent writing and musicianship, weighty topics, and some familiar friends (GAWVI, Tedashii, Alex Medina, etc.).

As far as the title, Lee has said that he wanted to give us music, a soundtrack that feels like the world we live in. One of the themes that kept coming up for him was how much waiting we have to do in this life. Themes of waiting, longing for God to heal him, what’s it’s like to be a Black man at this time in our country, and longing for Heaven come through in these ten excellent songs.

Below are a few comments about each of the new songs:

Clouds – This song is written by Dirty Rice, GAWVI and Lee and produced by !llmind, Dirty Rice and GAWVI. It has a great beat that grabs you from the very beginning. It takes you through his ups and downs of dreams and aspirations – from being ready to conquer all the monsters in his way and walking in his calling, to saying he needs a new dream because this one has become a nightmare, and then back again.

Too Cold – This song was written by Natalie Lauren, J.Monty, GAWVI and Lee and produced by GAWVI. It was the first single released. Musically, the beat is very satisfying. He’s not going to let the world mould or pressure him. He’s not going to make decisions about who he is, and what he does based on just what people want him to do and just how people respond to it.

Lord Have Mercy – This song is written by Lee and GAWVI and produced by GAWVI. He slows down the pace a bit as he sings that life this side of glory can be a mess. He first focuses on himself and his sin and then moves out to the world and the problems black men like himself are experiencing. In both cases he needs the Lord’s mercy. He’s waiting for Heaven and until then he’ll be be praising God in the waiting room.

IDK – This song (“I Don’t Know”) is produced by Keyzbaby. The beat is more laid-back. The song is a modern day psalm of lament (think of Psalm 13), as Lee painfully and honestly expresses that life is difficult, and his frustration that God is silent to him and others when they reach out to him for his help.

Ready – This song is written by Joseph Prielozny, Dirty Rice, Dimitri McDowell, John McNeill, Joel McNeill and Lee, and is produced by 42 North and Dirty Rice. The song features McDowell. The laid back tune finds Lee wrestling with his father’s death, the dying process, how he misses him and how he wishes that his father could know his two children. Lee is ready for death himself. Death has already been defeated. He’s ready. He’ll be ready when it’s his time.

Still Unashamed – This song is written by Dirty Rice, Alias (USA), Swoope, Tedashii, Alex Medina and Lee. It is produced by Dirty Rice, Alias (USA), Swoope and Alex Medina. It features Tedashii and samples Andre Crouch’s “We Are Not Ashamed”. The song is bold and has an infectious beat. Lee wants us to know that though the world is a mess, and people have said they have changed, he and Clique ten years later are still unashamed of the Gospel (Romans 1:16). A great song, and my favorite on the album.

Money Up – This song is written by Alex Medina and Lee, and produced by Medina, with additional production by Joseph Prielozny. This song features a good beat and lyrically is a bit different, with Lee role playing from a typical rapper’s perspective. He thinks that once he gets paid, once he makes good money, all of his problems will disappear. But he finds that with more money comes more problems.

Out My Way – This song is written by Alex Medina and Lee and produced by GAWVI. This defiant song is addressed to Satan, a hater, who wants his hope in the Lord destroyed. He owes him no favors, and is going to throw him overboard. But he also admits his own sin, and that not all of his problems are outside of him. The song features an infectious beat and hook.

Longer – This song is written by Natalie Lauren, India Shawn, Dirty Rice, Joseph Prielozny and Lee. It is produced by COBRA and features India Shawn. The laid-back track has similar themes as “Lord Have Mercy” and “IDK”, with him asking again “How long?” as he lets others (label, publisher, etc.) down. The focus here is on the soon to be 29 year-old Lee’s physical ailment (chronic fatigue). The theme of waiting comes up here again as Shawn sings the hook from God’s perspective, asking him to wait a little longer.

Billion Years – The closing song is written by Alias (USA), Natalie Lauren, Tyshane, Taylor Hill and Lee. It is produced by Alias (USA) and Tyshane and features Hill. Over a good beat, Lee longs for Heaven, he’s on his way home and not looking back. 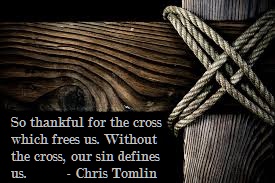 This is one of my favorite Christmas songs from one of my favorite artists. Our church hosted Michael for two of his Biblical Imagination Conferences/Concerts a few years ago. Listen to the song here, which has also been called “Now That I’ve Held Him in My Arms”