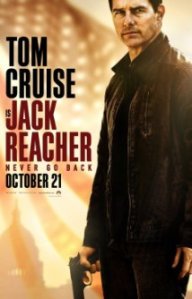 This film, the second in the Jack Reacher film series starring Tom Cruise as Reacher, is based on the eighteenth book in Lee Childs’ Jack Reacher series. In the books, Reacher has a 50 inch chest, is 6’5” and weighs 250 pounds. Cruise is just 5’7″ and weighs less than 200 pounds.

Child actually appears in the film as a TSA agent who overlooks the fact that Reacher doesn’t match the stolen ID he is using to board a plane. The film is directed by Oscar winner Edward Zwick (Shakespeare in Love). Zwick also co-writes the $68 million film with Marshall Herskovitz (as they re-wrote Richard Wenk’s script).

Reacher is a former Major in the Military Police. The film opens with a scene familiar to those who have seen the excellent trailer (see below), where Jack partners with the Military Police to take down a corrupt sheriff and his deputies. Afterwards as he travels by hitch-hiking around the country, he begins having occasional phone conversations with Major Susan Turner (Cobie Smulders, Agent Maria Hill from The Avengers films and Agents of S.H.I.E.L.D. television series). They joke about having dinner together the next time Jack is in Washington D.C. However, when Jack actually shows up he finds Colonel Morgan (Holt McCallany) in Susan’s office. Colonel Morgan tells him that Major Turner has been arrested for espionage. She might also be responsible for the murder of two of her own people in Afghanistan. In addition to that Jack is told that he has a now 15 year-old daughter that he doesn’t know about named Samantha Dayton (Danika Yarosh). And on top of all that (talk about a bad day!), even though he is no longer a Major in the Military Police, as he mentions several times in the film, Colonel Morgan finds a loophole that allows them to hold Reacher in MP custody.

Jack suspects a conspiracy from the start and is able to break Susan out, with both of them now becoming targets of a military contractor called Para Source, and their assassin credited as “The Hunter” (Patrick Heusinger). Jack, intrigued at the idea that he may actually have a daughter, tracks Samantha down. Before long, Jack, Susan and Samantha are all targets of The Hunter, with things culminating in New Orleans.

Cruise, Smulders and Yarosh have good chemistry as they seek to evade The Hunter and get to the root of the conspiracy so that they can clear Major Turner’s name. I found myself caring about these characters and also wondering if Samantha was really Jack’s daughter as they begin to build a father-daughter bond. Turner is tough as nails, in many ways a female Reacher, and yet also shows a motherly-side towards Samantha.

The film has at times over the top violence that earns its “PG-13” rating, and certainly pushes the “R” rating boundary. There are no sexual content issues to be concerned about, which was refreshing, and the adult language is less than we would experience in a film of this genre, though God’s and Jesus’ names are both abused multiple times in this film as they are in almost every film in theatres these days.

Cruise was excellent in the role of Jack Reacher, and I hope we see more films with him as Reacher. Smolders, who did all of her own stunts in the film, spending eight weeks training in various martial arts to prepare for the role, was a good partner to Cruise as Major Turner.

I enjoyed the film, but would caution potential viewers of the at times brutal violence portrayed.