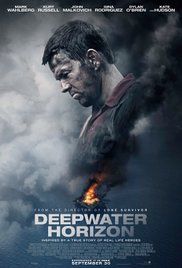 This film is directed by Peter Berg (Lone Survivor and the upcoming Patriots Day, about the bombing at the 2013 Boston Marathon, which both also star Mark Walhberg).  It is based on the well-publicized actual events that occurred on April 20, 2010, about 40 miles off of the Louisiana coast in the Gulf of Mexico. A special oil rig was built just for this film, located in Chalmette, Louisiana where filming mostly took place. It is considered to be the largest set piece ever constructed.

Mark Wahlberg portrays Chief Electrical Engineer Mike Williams. He’s a loving husband to wife Felicia (Kate Hudson, whose stepfather in real life is Kurt Russell. This was their first time working together), and daughter Sydney (Stella Allen). We see Mike say goodbye to his family for a 21-day tour on the offshore drilling rig Deepwater Horizon. Kurt Russell plays “Mister Jimmy”, the respected General Operational Supervisor.  Once Mike and Mister Jimmy reach the Deepwater Horizon, they encounter British Petroleum (BP) executives, including Donald Vidrine, played by John Malkovich. The drilling operation is already 43 days behind, and thus an important concrete test is not completed. We also see many items on the ship (phone system, etc.) not working properly. Early in the film there is a lot of technical talk related to drilling that most viewers will not be familiar with. But quickly we get the feeling that Vidrine and BP are all about the bottom line, and there is little concern for safety. This will soon have disastrous effects.

We are also introduced to other characters, such as Andrea Fleytas (Gina Rodriguez), but much of the film focuses on the heroics of Mike Williams as we see him put other people ahead of his own personal safety.

This is an intense disaster film with an estimated budget of $110 million.  The depiction of what goes wrong on the Deepwater Horizon is realistic and terrifying.  There is water, mud, oil and then quickly fire everywhere. Even though the plot is predictable and shown in the previews, this movie kept our interest and is worth seeing for the depiction of teamwork, courage and self-sacrifice.  There is a significant amount of adult language, including the abuse of Jesus’ and God’s names included in this PG-13 film, but it could easily be rated R. The film also includes a scene where the survivors kneel and recite the Lord’s Prayer together.

Most will already know that this disaster resulted in 11 people losing their lives and was the largest oil spill in the history of the petroleum industry and the biggest environmental disaster in U.S. history. Over the course of 87 days, about 200 million gallons of crude oil would flow into the Gulf. It’s estimated that British Petroleum’s (BP) cost for the clean-up, environmental and economic damages and penalties has reached $54 billion.   So much for cutting corners on safety due to concerns for the bottom line.

You may also be interested in director Peter Berg’s article The ‘Well from Hell’ – My Fight with BP to Film Deepwater Horizon, on what he went through to make the movie.