~ UPDATED PAGES ON THE BLOG ~

Book Review: The Trinitarian Devotion of John Owen by Sinclair B. Ferguson

I read most of this wonderful book (one of my favorites of the year), by one of my favorite authors sitting along the Saluda River in Cleveland, South Carolina over the Thanksgiving weekend. We were in the area for the marriage of our nephew Mark and his bride Tiffany. We had rented two cabins on the Saluda River, located a few miles Table Rock State Park. It was an incredible setting to read this book about the Trinity – the Father, Son and Holy Spirit. 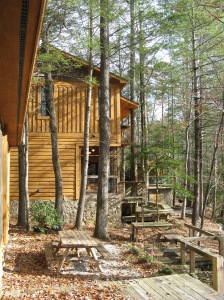 PROBING QUESTIONS AND LESSONS ABOUT CHRISTMAS:

Beyond the Ark by Doug Michael

• Of all the Charlie Browns in the world, you’re the Charlie Browniest. Linus
• Your most irritated, impatient, uncaring self didn’t separate you from God’s love today; it made you a target of his love. Scotty Smith
• Aimless, unproductive Christians contradict the creative, purposeful, powerful, merciful God we love. John Piper, (from Don’t Waste Your Life)
•Salvation is not a reward for the righteous, but a gift for the guilty. Steven Lawson
•If you didn’t earn your salvation how are you going to un-earn it? Tim Keller
• Ironically, the insistence that doctrines do not matter is really a doctrine itself Tim Keller.
• What is the deepest root of your joy? What God gives to you? Or what God is to you? John Piper
• Sometimes we emulate the Pharisees more than we imitate Christ. RC Sproul
• Why couldn’t North Korea have found “Left Behind” offensive? Barnabas Piper
• We’re far worse than we ever imagined, and far more loved than we could ever dream. Tim Keller
• The question is not, “Why is there only one way to God?” but “Why is there even one way? R.C. Sproul
• Lay your burdens of self-contempt, cynicism, and shame at the feet of Jesus tonight. He welcomes them, and you. Scotty Smith
• When it comes to understanding and appreciating grace, our biggest problem is our so-called goodness…not our self-perceived badness. Tullian Tchividjian
• You pursue excellence when you care about something other than your own excellence. Michael Horton
• Be more concerned with your character than your reputation, because your character is what you really are, while your reputation is merely what others think you are. John Wooden
• Christmas is telling you that you could never get to heaven on your own. God had to come to you. Tim Keller
• If you want to know God as your Father, you need to know Jesus Christ as your Savior. Kevin DeYoung.
• In heaven I’ll be shocked by those who aren’t there, those I didn’t think would be there but are. And the fact I’m there at all. Lecrae
• We live in a culture where the truth claims of Christianity are not only rejected, they are ridiculed. R.C. Sproul
• Faith is quenching the soul’s thirst at the fountain of God. John Piper
• Before crawling between the sheets tonight, preach the gospel to your heart and forgive whoever you possibly can. Scotty Smith
• Having hope is hard; harder when you get older. Wendell Berry
• Worry is a waste of energy. It can’t change the past. It can’t control the future. It only makes today miserable. Tullian Tchividjian
• What greater value could you possibly have than to be delighted in and sacrificed for by the Maker of the universe? Tim Keller
• When I find my justification in Christ alone, I am free to love and serve others in ordinary and unheralded ways. Michael Horton

Faith and Work Book Clubs – Won’t you read along with us?

Steven Garber was the commencement speaker at my graduation from Covenant Seminary in May. Tammy and I have been reading and discussing this book for the past few months. This week we look at Chapter 8: Learning to Live Proximately.

In the recommended reading for developing a vision for your life section of Matt Perman’s excellent book What’s Best Next, Matt suggested Tim Keller’s book Generous Justice: How God’s Grace Makes Us Just. I have read the book before but with the reminder from Matt, and in light of the recent decisions about the deaths of Michael Brown and Eric Garner, Tammy and I have decided to read and discuss it again at this time. This week we look at the Introduction.

God at Work: Your Christian Vocation in All of Life by Gene Edward Veith Jr.

When we recently visited St. Andrews Chapel where R.C. Sproul is one of the pastors, this book was the church’s “Book of the Month”. I’m excited to read it. We’ll look at a chapter each week – won’t you read along with us? This week we cover Chapter 8: Your Calling in the Church.