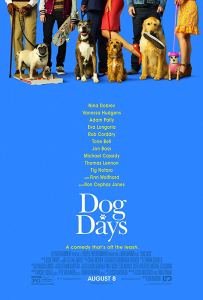 Dog Days is a feel-good romantic comedy featuring several characters and their dogs set during the summer in Los Angeles. The film is directed by three-time Emmy nominee Ken Marino (Children’s Hospital, Burning Love) and written by Elissa Matsueda (The Miracle Season) and Emmy nominee Erica Oyama (Burning Love).  The film had a budget of just $10 million.

****SPOILER ALERT*****
There’s a number of stories going on at the same time – here’s a summary.  Elizabeth, played by Nina Dobrev (The Vampire Diaries) is the host of a morning Los Angeles television show. Life is going well until her live-in boyfriend Peter cheats on her. That leads to her and her dog Sam going into depressions. She and Sam go to see the overpriced dog therapist Danielle, played by Emmy nominee Tig Notaro (Tig Notaro: Boyish Girl Interrupted). Former National Football League star Jimmy Johnston, played by Tone Bell, has a dog named Brandy and is a guest on Elizabeth’s show shortly after the breakup. Their “chemistry” on screen leads the producer to hire Johnston to co-host the show, much to the disappointment of Elizabeth.
Walter, played by Ron Cephas Jones (This is Us), is a lonely widower, who used to be a professor at UCLA. He enjoys his overweight pug Mabel, and has a few run-ins with a 16-year old pizza delivery boy Tyler, played by Finny Wolfhard (It, Strangers Things). The second run-in results in Mabel running away. Tyler offers to help Walter find Mabel and in turn Walter offers to tutor the fatherless Tyler at no cost.
Mabel ends up being found by Amelia, played by Elizabeth Phoenix Caro, a young girl recently adopted by Grace, played by Eva Longoria (Desperate Housewives), and Kurt, played by four-time Emmy winner Rob Corddry (Children’s Hospital).
Amelia had been having a hard time adjusting to her new family and Mabel, who she names “Mr. Snuggles” is just what she and her new parents need.
Tara, played by Vanessa Hudgens (High School Musical) works in a coffee shop but wants to do work that matters. She also has a crush on Dr. Mike, played by Michael Cassidy (Batman v. Superman: Dawn of Justice), the hunky veterinarian whose office is across the street.  A frequent customer, the socially uncomfortable Garrett, played by Jon Bass has a crush on Tara, but Tara doesn’t notice that. Tara finds a stray chihuahua who she names Gertrude. Her apartment building doesn’t allow dogs. Garrett runs New Tricks, a dog adoption business and says that he will take Gertrude. Tara, looking for more purpose in her life, begins to volunteer at New Tricks.
Dax, played by Adam Pally, lives in the same apartment building as Tara. Dax is in a band named Frunk, and isn’t very responsible, forgetting to even show up for his sister Ruth’s baby shower, which he agreed to DJ. Ruth, played by Jessica St. Clair (Bridesmaids) and husband Greg, played by Thomas Lennon, have twins and ask Dax to take their labradoodle Charlie for a while as they adjust to their new babies.
End of plot summary – Did you catch all of that?
*************************

Content concerns include some adult topics (breakups, living together, romance), and a number of misuses of God’s name (“Oh my God”).  Themes include the family, motherhood, friendship and adoption.
I have missed going to see romantic comedies at the movies because they haven’t made very many lately, but this one is a bit sappy.  At times this film has the feel of a Lifetime or Hallmark television movie. That could be because the director, writers and many of the actors involved are best known for their television performances. The film includes a solid cast and the writing is average at best. The film is also overly long at nearly two hours.
Dog Days is an enjoyable, feel-good film that is somewhat predictable, but has some positive messages. Because of the adult topics included I wouldn’t recommend the film for very young children.