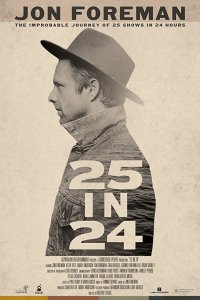 The film 25 in 24 documents a crazy dream. It was the dream of Christian band Switchfoot’s Jon Foreman. His dream was to play 25 concerts in 24 hours in his hometown of San Diego. The film is directed by Melody League and is beautifully filmed with many scenes of the San Diego area.
Foreman loves to play music. He is able to connect with people through his music. After Switchfoot concerts, he will meet fans outside the venue to play solo impromptu acoustic concerts.
As he released four Wonderlands EPs – Sunlight, Shadows, Darkness and Dawn a few years ago, he came up with a crazy dream. He would play 25, 3-song concerts in his hometown of San Diego in 24-hour period.  There was much to coordinate, and many variables (musicians, transportation, traffic, weather, etc.). Could he remember all of the lyrics to 75 songs playing for 24 consecutive hours? Could he pull off this ambitious project? He tells us that a beautiful dream is worth chasing, even if you fail.
At 10:00 am on October 24, Foreman started out in his van beginning the realization of his dream, an entire day of song. This film follows Foreman as he fulfills his dream, embracing community one song at a time.
I enjoyed watching Foreman and his fellow musicians (only the cellist played all 25 shows) playing in a variety of locations in San Diego – Spreckels Organ Pavilion in Balboa Park (with Foreman’s mother Jan), Fidel’s Mexican Restaurant with a Mariachi Band, at Rady’s Children’s Hospital with a high school orchestra, singing “Your Love is Enough” at a wedding reception for the first dance for the bride and groom, on the roof of Ironsmith Coffee Shop, a blistering “Resurrect Me” in show 24, etc. Highlights for me were the concert on Mount Soledad, where they watched the sunrise afterwards, the show at Rady’s Children’s Hospital, and the final show on Swami’s beach, where Foreman went into the Pacific Ocean to surf immediately afterwards.
As the evening went on, people began following them from show to show. When it got late into the evening, the crowds became smaller and the shows more intimate. In the midst of it all, Foreman’s van breaks down.
As Foreman and the musicians finished show 25, it was a celebration of family, friendship and community. This was an event that made people come alive.
Foreman tells us that many times it’s the chase that we are looking for. He was chasing after wonder, looking for his Maker, one song at a time. He stated that journey is where life happens. Not in control but in the chaos.
The film is available online where movies are sold (Amazon Prime, iTunes, etc.). Music fans – Switchfoot and Jon Foreman fans in particular – will appreciate this film.

Overboard, is a surprisingly entertaining gender-reversed remake of the 1987 film which starred Goldie Hawn and Kurt Russell. The film was directed by three-time Emmy winner Rob Greenberg (Frazier), and written by Greenberg and Bob Fisher (Wedding Crashers), adapted from Leslie Dixon’s original story.
Anna Faris (Mom) plays Kate, a single mother of three young girls living in Elk Cove, a small Oregon coastal town. She delivers pizzas and cleans carpets to try and make ends meet while also studying for a nursing exam. She is assigned to clean the carpets on a huge yacht owned by Leonardo Montenegro, played by Eugenio Derbez (Instructions Not Included, How to Be a Latin Lover). Montenegro is a playboy billionaire and heir of the third richest man in the world. Leonardo is obnoxious and has never worked a day in his life. He denies Kate her pay, insults her looks, and pushes her and the $3,000 carpet cleaning equipment she was using overboard.  On top of having to repay the cost of the carpet cleaning equipment, Kate receives an eviction notice from her home.
Later we see Leonardo himself go overboard and wash up on the beach with amnesia. He has no knowledge of his identity. When Theresa, Kate’s boss at the pizza shop ~ played by Golden Globe nominee Eva Longoria (Desperate Housewives) ~ hears about this, she tells Kate she has a plan to get back at Leonardo by making him work for her while she studies for her exams. Kate talks to the girls about their plan and they reluctantly agree. We then see Kate go to the hospital where she pretends to be Leonardo’s wife of 15 years. Leonardo is stunned to see that he is poor, sterile and works construction, where his soft hands earn him the nickname of “Lady Hands”. Quickly, Kate has “Leo” learning how to cook the family’s meals. He is told to sleep on a cot in the shed. He is told that he’s a recovering alcoholic, so no more alcohol or sex for now. Most of the above can be picked up from the film’s trailer. But what happens after Leo gets settled in the home is what makes this film worth seeing.
A side plot has Leonardo’s father Papi, played by Fernando Lujan near death. With Leonardo apparently dead, his sister Magdalena played by Cecilia Suárez tries to gain control of the family business.
Some of the dialogue is in Spanish, with sub-titles.  Content concerns include brief rear male nudity (played for laughs) and Leonardo’s partying with young women in bikinis.  There is some adult language and several abuses of God’s name.
Themes include deception, positive messages about family, hard work, friendship and responsibility.
Overboard is not a great film, but it was surprisingly entertaining and included some good messages about family, particularly the importance of a father.

Sara Groves follows her acclaimed 2015 album Floodplain with her thirteenth studio album. She has stated that her previous album found her on the floodplain reflecting on the kind provision that comes when she finds herself in a place where she cannot rescue herself. Abide with Me is a collection of hymns and songs that were with her on the floodplain. The album was recorded in a 105-year old church (the construction of which is shown on the album cover photo), that the Groves purchased in 2011 and converted into Art House North, a creative community for the common good, in the West End of Saint Paul, Minnesota. Groves has stated that it was appropriate that the album was recorded in a space built for congregational singing. The album was recorded with her long-time bandmates, Aaron Fabbrini (bass, pedal steel) and Zach Miller (drums), produced by John Mark Nelson and mixed by Ben Gowell. The album includes songs carefully selected from Groves’ personal list of hymns. Each song has provided a source of healing and comfort to her throughout the years. Groves’ husband first came up with the idea of a hymns album about fifteen years ago and has been compiling possible songs for inclusion since then.

The album is recorded simply and sparsely and may underwhelm on initial listen. However, I encourage you to give these hymns additional listens and the project will grow on you with each listen. I would also recommend you have the lyrics to these hymns in front of you as you listen to this beautiful recording.

Below are a few comments about each of the eleven songs: END_OF_DOCUMENT_TOKEN_TO_BE_REPLACED

Tim Challies’ latest book, which celebrates mothers who were used to shape the men who changed the world, began as a series of articles. Rebecca Stark and Melissa Edgington added helpful “Questions for Reflection” for each chapter, and Edgington also adds “A Mother’s Reflection” at the end of each chapter.
He tells us that it may surprise us to learn how many of our Christian heroes were shaped by the attentiveness and godliness of their mothers. Even though they may have had fathers who were present, involved, and godly, they would insist that their primary spiritual influencer had been their mother. In this book, he takes a brief look at some of them. Below are a few items I highlighted about each of the remarkable women profiled in this short book:

The Hidden Strength of a Weak Mother – John Newton

The Prayer of a Godly Mother – Hudson Taylor

END_OF_DOCUMENT_TOKEN_TO_BE_REPLACED

My wife and I love to go to the movies and usually see at least one a week – thanks to MoviePass!  Unfortunately, most films have some content issues. To assist parents here are 10 family-friendly films (plus one) from the past few years, along with my original reviews, that I can recommend to you.  Just click on the name in the list below to be taken to my review.

The Man Who Invented Christmas

And here’s a bonus family-friendly film for you to consider: Zootopia

The Man Who Invented Christmas

And here’s a bonus family-friendly film for you to consider:  Zootopia